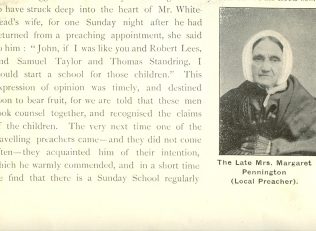 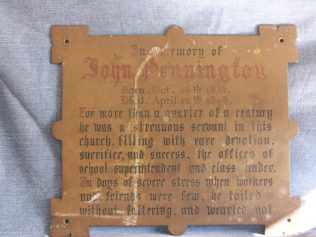 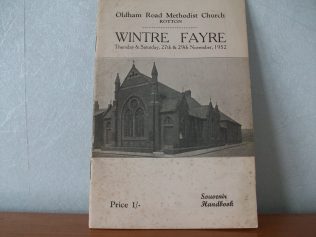 According to a ‘Souvenir and History’ booklet printed in 1909 of the Prims Sunday School in Royton near Oldham commemorating 50 years, the movement started there in the 1830’s, meetings being held in cottages before a school was built in 1859, and in 1867 a church and school.

My gt. gt. grandmother, Mrs. Margaret Pennington, is mentioned as a local preacher in the 1860’s, who was intimately acquainted with Hugh Bourne and William Clowes, and when they were in the neighbourhood they made their home with her.

Her son, John Pennington, was later Superintendent of the Sunday School, and he and his wife (my gt. gandparents), gave unstintingly of their means and time to the church.   I have a brass plaque from the wall of the church commemorating him, which was given to my aunt, Miss Nora Pennington, when the chapel was demolished, I think in the 1960’s.

My mother as a child spent all day on Sundays at the church and school, and although after marrying and moving further away she did not attend regularly, I used to go to special events there, and my aunt who lived with us did continue to go.

Some years ago whilst researching family history, I visited the Museum at Englesea Brook, and the curator there found me a book written by Sister Ellen Dando about her life in the movement and among the poor or London.   She was a lifelong friend of Nora Pennington.