The Stocktons of Ellesmere Port 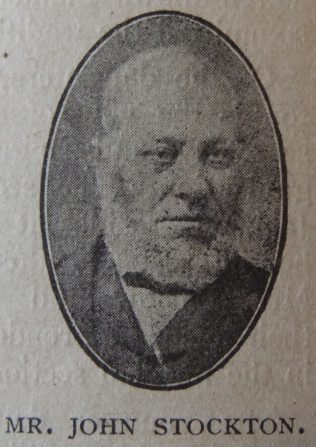 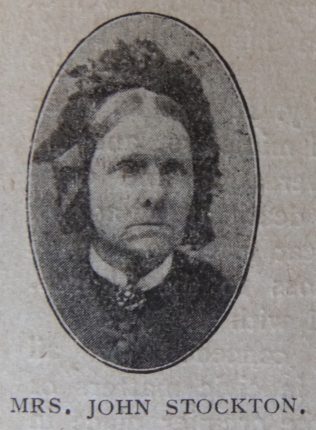 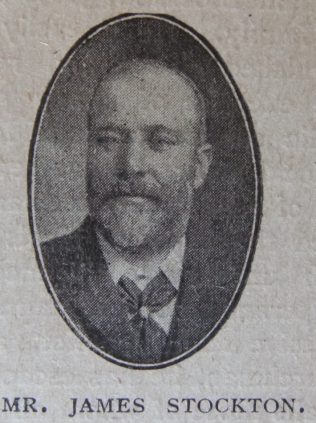 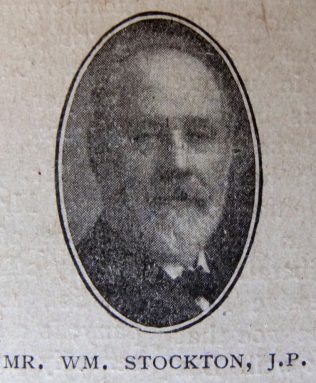 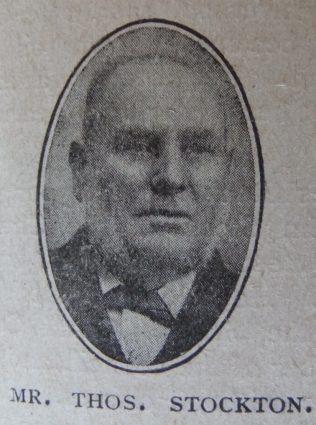 Transcription of an article In the Primitive Methodist Magazine by Rev. John Swinden

Any survey of the history of Primitive Methodism in Ellesmere Port and vicinity will reveal the fact that through all the years of its steady advance in numbers, character and influence, certain families through successive generations, have been closely identified with its life and work. Our Church owes much to the Wynnes, of Pool Town; with their descendants the Lewis’s and Coperalls; to the Jones’s, of Whitby, and others – all of whom have a splendid record of unswerving loyalty, unstinted generosity and devoted service. These families are with us to-day in the fullness of their strength, worthily maintaining the great traditions of the past. Among these good families, the Stocktons have always had an honoured place. They have had an unbroken connection from the beginning of its history, and have played their part, and played it well. To their solid achievement and leadership may be attributed in large measure the commanding position our Church occupies to-day.

The relations of the Stockton family with Ellesmere Port began about the year 1838, when Mr. John Stockton came from Burwardsly to work in the locality. He was a serious-minded, impressionable youth, but in no way associated with religion or the Church. His parents were Primitive Methodists in the Burland Circuit – his father being a local preacher, co-operating in mission work with the revered Thomas Bateman and others of Connexional renown. Soon after his arrival in “the Port,” Mr. Stockton attended a great camp-meeting at Willaston, was converted, and henceforth walked in newness of life. He sought at once the fellowship of those who were to him “the chosen people of God.”

Primitive Methodism had already gained a foothold in the locality. Mr. and Mrs. John Wynne, of Pool Town, were converted under the preaching of J. Wedgwood, at Stanney, and in 1823 had opened their cottage for services. A society was formed, which still continues. With this little cottage church Mr. Stockton became identified. He came on the plan as a local preacher in 1842, and until his death he cheerfully and faithfully fulfilled his duties. Though “in labours abundant” and “in journeying oft” Ellesmere Port was the chief object of his solicitude and care. To see the “cause” established and prospering was his most fervent desire. Since 1835 occasional meetings had been held in cottages or in the open air, but no society was formed. Mr. Stockton married in 1840 the daughter of Mr. Wynne, of Pool Town. Many of the meetings were held in his cottage. In 1856 he rented a room over the old bakehouse, which served as a place of worship until 1872, and is remembered with reverence and affection as the spiritual birthplace of many of our people. In 1872, Mr. Stockton interviewed the Marquis of Westminster, and secured, without charge, the freehold site on which the old chapel and schools stand. Along with such worthy men as Messrs. T. Hales and R. Woodward, he took a responsible part in the development of our Church. In all his relationships with the Church, his consistent and devoted wife sympathised, co-operating with him in every good work. Their substance was laid on the altar of the Church. Their children grew up in the fear of the Lord and in love of the Church. The home atmosphere was encouraging to Christian virtue and service. Their house was the home of the preachers. Men of high repute, and those unknown to fame shared its hospitality. They were equally welcome. Respect for the ministry amounted to veneration and affection. Conversation centred round the Connexion and the preachers they had known. Their prayers were for the prosperity of Zion and the salvation of men. They were both righteous before God, walking in the commandments of the Lord – blameless.

It is not surprising that there is no break in the moral succession of these worthies, and that the characteristics so strongly marked in the elders should reappear in the next generation. Good people do not come by chance. While blood tells, still more does example and training, Mr. and Mrs. Stockton taught their six children religion by being religious in an attractive way, and cultivated in them a fondness for religious work and the habit of persevering with it though disappointment and difficulties had to be faced. Mary, the eldest – born in 1842 – walked in all the ways of her parents. She gave her best, and found her chief delight in the worship and work of the Church. Her husband, Mr. John Moffat, was like her in piety and devotion. His early death deprived the Church of a promising worker, and left Mrs. Moffat to face alone the responsibility of training her children and maintaining her home. How faithfully this was done is reflected in their character and worth. Mr. John Moffat, a trustee of our property, is society steward of our Stretford Church, Manchester. His loyal support, and that of his family, to all things Connexional, show him to be worthy of his lineage and training. The elder daughter is the wife of Mr. T.H. Whitby, who has an honourable record as church organist and in secretarial work. Mrs. Whitby is a devoted member and zealous worker. Regular in worship, attentive to religious duty, they are training their children to follow in their steps. Miss Moffat is not a whit behind in her love of the House of God, and zeal for the Kingdom of Heaven.

Mr. John Stockton, born in 1844, left Ellesmere Port while in his teens, and never returned to reside. He came under other influences in early life, and became associated with the Wesleyan Church. He claimed to the end of his life that his sympathies were with the Church of his fathers, though he was never actively associated with it.

Mr Thomas Stockton, the second son, became a well-known townsman and a pillar of the Church. The outstanding feature of his character was manliness, robust and conscientious, a man of broad mind and catholic spirit, who extended to others the liberty he always claimed for himself. An ardent temperance advocate, a keen politician, widely read, of deep sympathies and high ideals, he was honoured far beyond the limits of his Church and town. He was a sincere and earnest Christian man, living a life beyond reproach, serving with undivided loyalty the interests of the Kingdom of God. He loved the Church, and was a familiar figure in every part of its life. Mrs. Stockton shared his faith, sentiments and ideals. Their home life abounded in hospitality. It was an open secret that they loved ministers, and delighted in their conversation and company. Mr. Stockton’s death at the age of sixty-four, was a great grief to a wide circle and a great loss to the Church. Mrs. Stockton is still with us.

It will be readily conceded by all classes that whether in civic matters or in its religious life, the premier place in Ellesmere Port must be assigned to Mr. William Stockton, J.P., the third son of the family. He is easily its most distinguished citizen and religious leader. The exercise of many gifts in unique public service accounts for this honour. In local affairs he has revealed the qualities of the true statesman, and has fostered the highest ideals of citizenship with unceasing diligence. An ardent temperance worker, staunch Liberal, progressive educationalist, aggressive Free Churchman, he has escaped the woe that befalls those of whom all speak well. But his worth and work have been recognised by all classes. He has been a county magistrate since 1902, and chairman of the U.D.C for nine years. In 1910 he received a testimonial and presentation of plate in recognition of distinguished public service. It would be a great mistake to regard this eminent public service as the chief work of Mr. Stockton’s life. This is found in the annals of the Church. As a boy of seven, he was one of the first scholars in the Sunday school. He has been in it ever since, and for nearly forty years has expounded the International Lesson to the Senior Bible Class. Called to preach when but a youth, he serves us efficiently and willingly. For twenty years he has been circuit steward. In his admirable wife Mr. Stockton found a true helpmeet. Her parents – Mr. and Mrs. James – of sound Primitive Methodist stock – came from Chester and joined our Church. Their children rise up and call them blessed. To their only son – Mr. Colin Stockton – a well-known Elmfieldian and his wife are committed the tradition of a good name.

Of the daughters, Mrs. Wifred Dutton is the wife of our esteemed church secretary, and singularly gifted in organisation. The second daughter – Mrs. Jackson – resides at Morpeth, but retains her interest and affection for the Church. Mrs. Barlow and Mrs. Griffiths, with their husbands, render valuable assistance in the musical section of Church work.

The younger daughter of Mr. John Stockton – Mrs. Skinner – was a life-long Primitive Methodist. Transferring her membership to Liverpool soon after her marriage, she became known as an earnest Christian. Her son is a local preacher, and her daughters earnest workers.

In Mr. James Stockton, the youngest son of Mr. John Stockton, the Church has one of its most reliable and trustworthy officials. He holds a responsible position under the S.N.R. Canal Company; is a member of the council, and deservedly popular with all classes. He is a free, generous, loyal-hearted man. Always doing good deeds. He serves the Church as society steward and trust treasurer. Mrs. Stockton’s parents were warm adherents of the cause, and owned the room in which the first services were held. She also has served from the beginning with undivided heart. Many can testify to the welcome and comfort of their hospitable home. Their daughter is a valued member of the choir; their sons – one of whom is in France – are loyal to the Church of their fathers.

John Stockton was baptised on 29 June 1816 at Tattenhall, Cheshire. His parents were Thomas, a labourer, and Elizabeth.

His probate record describes him as a milk dealer.

John Stockton was born in 1844 at Ellesmere Port, Cheshire. At the time of the 1911 census he was working as a warehouseman in Birkenhead, Cheshire. He married Elizabeth Whelan (abt1848-1918) in late 1864 in the West Derby Registration District, Lancashire. Census returns identify eight children.

John’s death was registered in early 1917 at Birkenhead, Cheshire.

Thomas Stockton was born abt 1848 at Ellesmere Port, Cheshire. Census returns identify that he worked as a marine engineer (1881) and later was a grocer and baker.

He married Ann Griffiths (b abt1856) in the spring of 1875 in the Holywell Registration District, Flintshire. There were no children.

William Stockton was born in 1849 at Ellesmere Port, Cheshire. He was a butcher by trade.

Ann Elizabeth Stockton was born abt 1855 at Ellesmere Port. She married Joseph Postlethwaite Skinner (1861-1941) in the summer of 1875 in the Chester Registration District, Cheshire. Joseph was a shipwright. Census returns identify eight of eleven children.

James Stockton was born in 1857 at Ellesmere Port, Cheshire. He was a cashier.

James married Susannah Tomkinson (abt1859-1924) in the summer of 1881 at Ellesmere Port. Susannah was born in Melbourne Australia. Census returns identify three children.