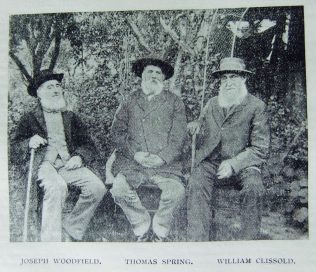 Transcription of Sketch in the Christian Messenger by W.W.

LEST there should be some mistake, we hasten to assure our readers that in the above title there is no reference to those well-known celebrities named the ‘three old men of Painswick.’ These must have been men of a former era, an era corresponding with that of the Hebrew Patriarchs, otherwise we can scarcely credit a story which asks us to believe that a passing stranger found by the roadside, a man of extreme age weeping bitterly in consequence of a ‘beating’ he had received from his ‘feyther,’ for throwing stones at his ‘grandfeyther.’ The longevity of the inhabitants of this lovely Gloucestershire village, to which the somewhat ambitious title of ‘Queen of the Cotswolds’ has been given, is evident from a glance at the tombstones in its pretty churchyard, but we propose to deal with a more recent age, and with characters having something more to recommend them to our notice than mere age.

To those acquainted with the history of Primitive Methodism in Painswick for the last half-century, the names of William Clissold, Joseph Woodfield, and Thomas Spring will be very familiar?” They became known as the Painswick bishops in consequence of a humorous remark casually made by a Circuit minister a few years ago. The title clung to them, probably because their position, influence, and age rendered it appropriate.

The sole survivor of this trio of worthies, Thomas Woodfield, we found on our last visit spending the calm evening of life in a pretty little gatehouse, leading to the mansion of a family in whose service he has been employed for more than sixty years. He was confined to his bed, suffering much pain, and oppressed by the weight of over four-score years, but the peaceful smile, rarely absent from his features, greeted our entrance, and his faith remained unmoved, supported by the assurances of the open Bible which lay at his side.

His own life, he repeatedly asserted during our conversation, had been quite uneventful. He had never accomplished anything worth recording. But we reminded him that a fruit tree may not bear a single abnormal specimen and yet be weighed to the ground with precious fruit. So the good deeds and kind words of half-a-century of faithful Christian service, none of them remarkable when viewed singly, when seen in the aggregate represent a great deal. His record as a local preacher dated from near the middle of the century, and had its beginning in an attempt to supply a missed appointment in a neighbouring village. Next day, to his astonishment, the quarterly meeting recommended him as a ‘local,’ and his name was forthwith placed on the plan. His duties at the Hall prevented him from labouring as extensively as some of his brethren, and most of his work was done at Painswick, where, unless planned elsewhere, he was always present, prepared to render any service in his power. When a preacher failed to come, Brother Woodfield was always ready to fill the gap as best he could, and as a hearer, his happy upturned face never failed to encourage the speaker. He was also a class leader and society steward, which offices he continued to fill until increasing weakness made it necessary for younger hands to relieve him.

Of William Clissold we cannot speak from personal knowledge, but from information supplied by friends who were intimately acquainted with him, we hope to be able to present a fairly accurate portrait of the man. He had been converted at Chippenham, but soon afterwards removed to the neighbourhood of Painswick, where he rendered excellent service as a class leader and local preacher.

A ‘plain gospel preacher’ he was often called, but he was not by any means an ordinary one. In appearance he was tall, rather stout, with big bony limbs, and even in old age possessed of considerable vigour. His face was rugged, but beneath his shaggy eyebrows there gleamed eyes which, even when sparkling with humour, revealed a heart full of kindliness and love. As a preacher he was in constant demand, often taking seven or eight double appointments in the quarter, besides extras, which involved perhaps eighty miles walking, and this after toiling hard as a quarryman during the week. On week days, he would say, he worked in nature’s quarry, and on Sundays in the spiritual quarry, trying to get out stones to be polished for the temple of God. Often before preaching at a place he would visit every house, talk to the people, and invite them to the chapel. His voice was strong without being unpleasant, his sermons quaint and original without being grotesque, and his manner very earnest and emotional. Many remember his powerful appeals, uttered with broken voice, and while the tears were flowing down his furrowed cheeks.

In his later years especially he was very heavenly-minded in his discourses. One brother said of him that if he took for his text: ‘The wicked shall be turned into hell,’ he would get to heaven before reaching the end of his sermon. On week-days as well, his mind turned unconsciously to the things of God, and often his secret communing brought him overflowing happiness. Once, in company with another man, he was engaged in sawing timber. Occasionally he would make a sudden spurt, driving the saw through the wood with tremendous energy, until recalled to himself by his friend’s inquiry – ‘What’s up now, Clissold?’ when he would admit that he had been thinking of the services of the past Sabbath. His readiness of resource is apparent from the following story. Going to an appointment he was met by a clergyman, who asked him where he was going. ‘ To preach,’ said Clissold. ‘But you have no authority to preach,’ said the clergyman. ‘Oh, yes I have,’ said Clissold, ‘and you can’t stop me. But I could stop you. If I took away your gown you mustn’t preach; if I took away your book you couldn’t preach, and if I took away your money you wouldn’t preach.’

The primacy, however, if we can admit of degrees among equals, must be accorded to Thomas Spring. Up to the time of his death in June, 1899, he was pre-eminently Bishop of Painswick Primitive Methodism. For many years before the end Father Spring, as he was sometimes affectionately called, had not been able, owing to ill health, to do a great deal of preaching, but his age and long connection with the cause, his business integrity and stainless character, his unabated enthusiasm, and deep affection for, and interest in, the society, made him greatly loved and widely respected. Few things had stirred the Painswick youths so much as when it was announced ‘Thomas Spring was converted last night,’ but the immediate change in his life, and his ready adhesion to the society showed that the work was of God. Almost immediately, though but a youth, his name was placed on the plan, and at the time of his death he had been a local preacher over fifty-four years. His first attempt at speaking was at Stanley End, in the cottage of a noted character known as Sally Stevens. He felt that his effort had been a miserable failure and wished himself outside, but old Sally, shaking him heartily by the hand said, ‘ We’ve had a glarious meeting, ain’t us? Ye’ll come again, won’t ye?’ and young Spring felt very much encouraged.

In early manhood he had a hard struggle in business, but this did not deter him from walking scores of miles on Sundays to preach in his own and adjacent circuits. He did much pioneer and mission work. Miserden chapel and Society are largely the result of his personal energy and enthusiasm. Sometimes he tasted the hardships of such work. At one place he could get no food, and on attempting to buy some received a severe lecture on the sin of Sabbath breaking. When he became possessed of a pony and trap he rode to his more distant appointments, and often took a friend or fellow-local with him. One black dark night he and his friend Thomas Claridge, whose popularity as a preacher was most remarkable, were thrown violently out of the trap, which with the pony, rolled over and over to the bottom of a steep bank. On getting lights they found to their great surprise that not even a stitch in the harness was broken. Mr. Spring always declared that, but for the mercy of Providence, they must both have been killed. While introducing Primitive Methodism into another village, Clissold, who accompanied him, was praying, when the vicar seized him by the shoulder and tried to stop him. But Clissold kept on praying and Mr. Spring shouted ‘glory’ and ‘hallelujah’ until the interrupting cleric was glad to beat a somewhat undignified retreat.

In the erection of the pretty and well-situated chapel in which the society now worships, Mr. Spring took the foremost part. It continued to fill a large place in his affections, and one of his last acts was to carry through its recent renovation. Of the ten chapels in the circuit he was trustee for six or seven, and in the affairs of the station generally his interest only ceased with his life. May those who cherish his memory never cease to emulate his zeal.

Joseph was baptised on 30 May 1819 at Painswick, Gloucestershire. His parents were James, a labourer, and Martha.

Joseph earned his living as a gardener.

Joseph died in the first quarter of 1905 at Painswick, Gloucestershire.

William was born in 1815, but not baptised until 4 October 1818 at Painswick, Gloucestershire. His marriage certificate identifies his father as Daniel, a labourer, although the baptism record identifies parents as William and Sarah.

William worked as a stonemason and quarryman.

Thomas was baptised on 29 July 1827 at Painswick, Gloucestershire. His parents were William, a labourer, and Elizabeth.

Thomas married Elizabeth Winfield (1821-1899) in late 1851 in the Stroud Registration District; probably at the Independent Chapel, Painswick where she had been baptised. Census returns identify two children.