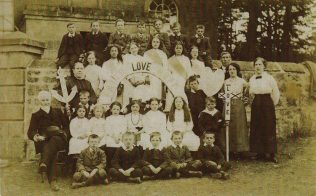 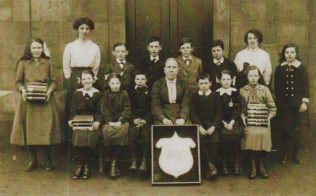 These two group photographs dated about 1912 are of Sunday School members of Milfield Methodist Church with which my family was associated. My grandfather (William Curry 1860-1924) was choirmaster there and lived in Rose Cottage in the centre of the village from which he also ran a joinery business.

On this first photograph, Rev Upright, the church minister, is seated in the second front row and his wife is standing beside him. Standing at the right of the photo are my mother (Hannah Curry 1891 – 1961) who was a teacher in the Sunday School and my aunt (Janet Young Curry 1893 – 1961) The third and youngest sister is in the second front row.

The second photograph is of a group from the Sunday School when they were successful in achieving first place and shield in a scripture examination. This shows Mrs Upright holding the shield, Miss Chrissie (Christian) Upright (with white blouse, minister’s daughter, in back row left-hand end) and also Hannah CURRY also in a white blouse on the right of the photo and in the back row.

The minister, Rev. Thomas Kelsey Upright features on a separate page under the section People: Primitive Methodist Ministers. There were three generations of Uprights who entered the ministry. The following extracts from the censuses give an initial impression of the extent to which the Uprights moved around the country, not only the four ministers when transferred from one circuit to another but also the father of the first Rev Upright.

William’s son, Thomas, was the first of the ministers …..

….. and his son, William, trained for the ministry.

(These records are a useful source of material, such as the occupation of the scholar’s father or where the family removed to eg left to help father with blacksmith’s work and flitted to Barnard Castle)