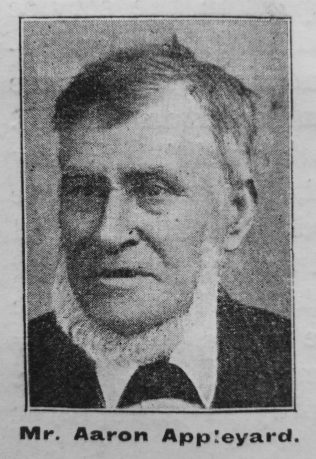 Transcription of Obituary in the Primitive Methodist Magazine by B. Haddon

Aaron Appleyard was born at Castleford, in 1817. His early life was one of considerable poverty and hardship, being denied many of the privileges and comforts so commonly enjoyed to-day. His school days were few – having begun work when eight years old. It was not until he was twenty-five years of age that he gave his heart to God, up to which period he had lived a somewhat profligate life. His conversion took place at a lovefeast in the Woodlesford Wesleyan Chapel. He was genuinely saved. It is not given to every Christian to have such a clear and abiding consciousness of acceptance with God as he enjoyed, whilst the reality of the change he had experienced was evidenced in a life of devotion to Christ and His cause. He at once identified himself with a small band of Primitive Methodists at Castleford, and the first work he undertook was the establishment of a Sunday School. In 1844 his name appeared on the plan as a local preacher, in which capacity, for fifty-six years, he did much hard and useful work. Despite his lack of education he became a most acceptable and powerful preacher of the Gospel, travelling thousands of miles and witnessing hundreds of conversions. He had little book-knowledge, but in his own experience he found abundant material for effective pulpit discourse. He was in his element in a class meeting, at a camp meeting, or in a lovefeast, on which occasions he was always very welcome. As a class leader he was most devoted and useful, having great faith in the importance and necessity of that Methodist institution as a means of Christian strength and growth. As a sick visitor his labours were in great demand and signally blessed. With the exception of about four years his labours have been confined to the Pontefract and Castleford Circuits, where he was almost universally respected and revered. Even when no longer able to follow his daily occupation he continued in active Christian service. The Circuit Quarterly Meeting appointed him to Mission Taushelf – a newly-built part of Pontefract. He gave himself to the work most heartily, giving much time to house-to-house visitation. A preaching service was established in a cottage house and a Sunday school begun; and we have there now a flourishing society of forty members, a progressive Sunday school, and a beautiful and comfortable iron chapel. One of the foundation stones of this chapel, subscribed for by the local preachers, was laid by him: a privilege which was counted by him as a great honour. He lived to the ripe age of eighty-three years, and the end came very slowly. He retained consciousness to the very last, and his Christian faith and hope and joy never abated. Speaking to a brother local preacher, he said:- I should like to have all the infidels of Castleford present. I would shew them that the Word of God is true, that I am firm on the Rock, Jesus Christ, and that I am not afraid to die.” On one occasion they sang a verse or two of his favourite hymn, and when they had finished, he said, “Nay, lads, ye have left the best verse out.” And then, with great fervour, he lined out the verse:

“Thrice blessed, bliss-inspiring hope
It lifts the fainting spirit up,
It brings to life the dead;
Our conflicts here will soon be past,
And you and I ascend at last,
Triumphant with our Head.”

Aaron was baptised on 1 February 1818 at Castleford, Yorkshire. His parents were Aaron, a labourer, and Alice.