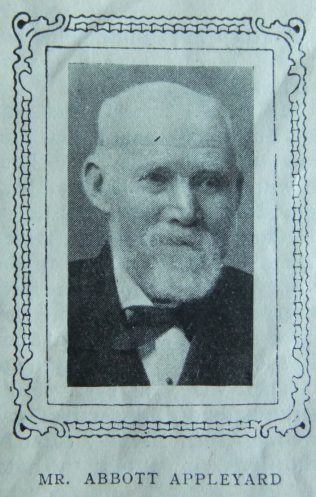 ABBOTT APPLEYARD, of Bramley, is a man whom any church would delight to honour. Born seventy-six years ago, he had the privilege of being nurtured in a loyal Primitive Methodist home, for his father, Thomas Appleyard, was one of the founders of Leeds Primitive Methodism. When twenty years of age he joined the “Moriah” Church, and on the death of his father, two years later, took his place as Class leader, in which capacity he has given unstinted and unbroken service for fifty-four years. But he was never content simply to hold what others had won. Fifty years ago he succeeded in forming a class at Hough End. Satisfactory accommodation was not easy to secure and on one occasion he characteristically declared that “he would rather see a House of God there than have one of his own,” a wish which was soon realized. Under his leadership the fine premises now in use were erected in 1866, he himself laying the principal foundation stone. In more recent years a suggestion of the late Mr. W. Beckwith turned his attention to Back Lane, where he organized open-air services, formed a Class which he continues to lead and was chiefly instrumental in the erection of a chapel. In how many other directions he has served his church it would be difficult to say. He is senior local preacher on the Leeds Fifth plan. As Sunday school teacher and superintendent he has done excellent work. For each of our Bramley chapels he serves as trustee, and in Circuit matters generally he has taken untiring interest. Recently bereaved of his devoted wife, and suffering from failing health, his labours are now somewhat restricted, but he has the joy of seeing stalwart sons and daughters carrying forward the work.

Abbott was born abt 1836 at Bramley, Leeds, Yorkshire, to parents Thomas and Christiana. Thomas was a mason.