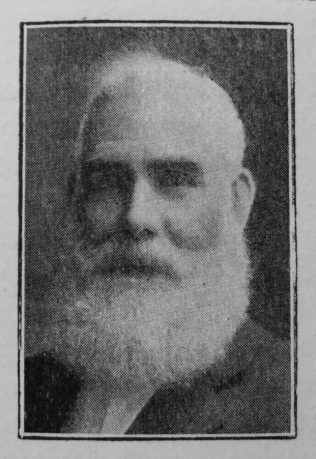 Transcription of Obituary in the Primitive Methodist Magazine by Christopher Longstaff

James Absalom was born at Ballast Hills, Newcastle-on-Tyne, on May 31st, 1836. Of his early life we know little except that when a youth about twenty years of age he removed to Benton Square, and after residing a short time there, went to live at West Sleekburn.

When about twenty-one years of age he surrendered himself to Christ. He at once joined the church and laid himself out for usefulness. Soon after his conversion he removed to West Cramlington and at once identified himself with our church, of which for fifty years he was a member.

Brother Absalom loved his own church, was jealous of its honour, was true and loyal to its rules and usages, and supported it generously. As class leader and society steward he rendered valuable service. He was a splendid attender of the week-night services and of all the means of grace, though his time was much occupied as an overman of the West Cramlington Pit.

During the latter part of his life he was troubled with rheumatism which prevented him somewhat from attending the services. On May 29th, 1907, he was stricken down with an affection of the heart, and after great suffering, on June 3rd, aged seventy-one years, he was translated to the higher service. On June 6th, in Cramlington Churchyard, we laid his body in the grave in sure and certain faith of a double immortality; the immortality of the spirit that lives with God, and the immortality of the deeds that he did, that will live in the lives of other men.

A large concourse of people attended the funeral service, conducted by the Rev. C. Longstaff assisted by the Rev. W.F. Todd. His wife pre-deceased him. He leaves behind him one son and two daughters. One of his daughters is the wife of Mr. Dryden, of South Shields, a well-respected official of our church. His son James and Miss Absalom are members of our church at West Cramlington.

Our deepest sympathies are with the bereaved family “who sorrow not as those who have no hope.”

James was baptised on 19 June 1836 at Hood Street New Connexion Methodist Chapel, Newcastle upon Tyne. His parents were David Absalom, a cordwainer, and Susannah Lowthart.