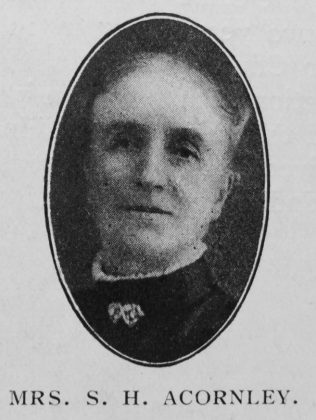 Transcription of obituary published in the Primitive Methodist Magazine by W.H.A.

The beloved wife of Rev. W.H. Acornley daughter of Abraham, a farmer (1861), and Mary Fielden, was born at Walsden, Lancashire, February 18th, 1846, and departed this life May 17th, 1912, aged 66 years. Converted in her early teens, she joined the Bottoms Church in the Knowlwood Circuit. The family moved to Rochdale, where she was married to him who mourns her loss.

For seven years they resided in Manchester, where her husband was employed in City Mission work. In 1884 they went to America, where they were stationed at Shenandoah, in the Pennsylvania Conference. Here she commenced the arduous duties of a minister’s wife, and here, as though a Divine hand guided, she finished her work.

She was an exemplary Christian in public, and in her home life she was all that a wife and mother could be. Her children rise up and call her blessed. Her last illness was a painful one, but she testified freely of the blessed hope of immortality. Forty-two years of loving companionship is not a small thing to lose, but we look forward to a joyful re-union in the glory land.