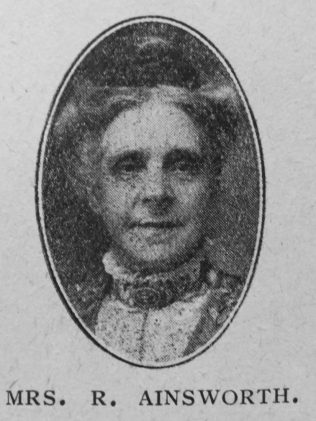 Transcription of Obituary in the Primitive Methodist Magazine by D Oakley

Mrs. Ainsworth, wife of the Rev. R. Ainsworth, passed to the nearer vision and higher service on April 27th, 1918, after long illness and pain.

She was a beautiful soul. Nature had favourably endowed her in temperament and ability. Grace sweetened and ennobled; and she wore “the beauty of the Lord our God” to the impressing of many. She was won to God in childhood, and was deeply religious. In her days of health she was an ardent worker, especially among young women. She looked well to the ways of her household. There was the atmosphere of hospitality and cordiality in her home. In the long years of his ministry her husband was greatly helped by her character and consecration. In many circuits the fragrance of her beautiful life will long linger.

In the dark and cloudy days of long weakness and pain she was brave, cheerful and uncomplaining. To visit her was to be reassured in the reality of goodness and the sufficiency of divine grace.

In April, 1913, in this Magazine, the sketch of her husband appeared. The writer paid fitting tribute to the wealth of her ministry in conjunction with that of her husband. He said: “The ministry of Mr. Ainsworth has been greatly enhanced by his excellent wife. In many of the circuits her name is cherished in hallowed memories. By sweetness of disposition, charm of manner, by true companionship, by making the domestic circle a home indeed, she has given effectiveness and power to her husband’s ministry.” She shared with him in all the many-sided duties of a Primitive Methodist minister. It is impossible to state how much ministers owe to their wives. We recall the loving tribute which was paid by Dr. Alexander Maclaren, of Manchester, to his wife. He said that if anyone spoke to his ministry apart from his wife they would be only “speaking of a fragment.” Ministers will understand the deep significance of this remark. Mrs. Ainsworth, with true insight and with absorbing love, was able to enter every phase of her husband’s activities. She was engaged directly in the religious and spiritual work. She found pleasure and interest too, in the financial schemes into which he had to throw his energies. Most of all she was concerned with him in the lives and happiness of the people to whom they were called to minister. In subtle and endearing ways she contributed to the success of the Church and the extension of the Master’s Kingdom. We can imagine what this loss means to her bereaved husband. We can also imagine all the happy and precious memories with which his heart and mind have been enriched through the long years passed. Heaven will seem all the nearer to him now that she is there, and life will take on even richer sanctions and promises and benedictions.

The funeral service took place at Chapel Street, Blackpool, May 1st, when the Revs. F. Smith, A. Morton, A.J. Campbell and J. Prince  took part. The Rev. J. Swales gave a beautiful address. Sorrow and thanksgiving were mingled! Loss of such as she was; and the world’s need so great! Thanksgiving for such a life, and the eternal hope which she now shares.
“For all Thy saints, who from their labours rest,
Who Thee by faith before the world confessed,
Thy name, O Jesus, be for ever blest.’’

Mary was born abt 1851 at Sabden, nr Burnley, Lancashire.