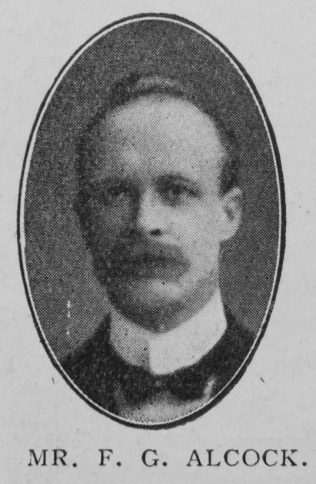 Transcription of obituary published in the Primitive Methodist Magazine by J. Teece

Mr. Alcock was born at Talke, North Staffordshire, on January 25th, 1869. He was a Primitive Methodist of the third generation. From a child he attended the Sunday School. At the age of twenty he gave himself to Christ and the Church. Eighteen years ago he removed to Burslem, and at once identified himself with the Clowes’ Memorial Church. His sincere piety, genial disposition, and willingness to serve his Saviour and Lord, in Church and Sunday School, quickly secured to him a sure and an abiding place in the confidence and affection of officials and members alike.

In the Sunday School his presence and work were highly appreciated. He filled with credit the offices of assistant society steward, assistant superintendent in the school, and class leader. But for his natural modesty and retiring disposition he would have been placed in more important positions.  His whole working life was connected with one firm, rising from apprentice to foreman therein.

His death came with surprising suddenness. On Friday evening, August 3rd, and whilst at work, he had an apoplectic seizure. Early the next morning he passed to the land beyond, to be for ever with the Lord. It was a great shock to his numerous friends and a terrible blow to his wife and family. To him it meant victory and exaltation. The funeral service was at Clowes, August 7th, conducted by Rev. J. Teece, and on Sunday evening, August 25th, a memorial service was conducted in the same church by Rev. W.B. Bache. Much sympathy has been shown towards the widow and the three fatherless children. May the God of all comfort be ever their Guide and Helper.

Frederick was born on 25 January 1869 at Talke, Staffordshire, to parents David Alcock, a bricklayer (1891), and Hannah Browning.

He married Mary Jane Wood (1868-45) in the spring of 1894 in the Wolstanton Registration District, Staffordshire. Census returns identify three children.