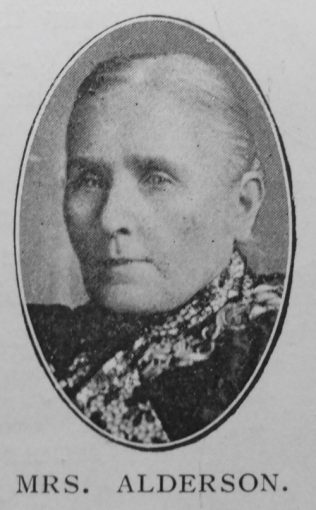 Transcription of obituary published in the Primitive Methodist Magazine by B. Haddon

Mrs. Jane Alderson, wife of Rev. John Alderson, Gateshead, was born at Boldron, near Barnard Castle, September 9th, 1840. She was the daughter of Mr. William Hobson, a local preacher in the Darlington Circuit, whose house was in reality a preacher’s home. Converted at an early age, Mrs. Alderson was closely and actively associated with Primitive Methodism almost all her life. Even prior to her conversion she took great interest in the building of the Newton-le-Willows chapel. She was the first convert in that chapel, and her conversion was the beginning of a great revival. Over forty years ago she became the wife of the Rev. John Alderson, so well-known and respected in the North of England.

Mrs. Alderson much valued the services of God’s House, particularly the Sacramental Service. Our sister was a real godly woman, though she did not parade her religion. Of a retiring disposition, she yet revealed considerable strength of character. She was indeed a true friend, a faithful wife, and a devoted mother.

During her last affliction, which was protracted and painful, she often seemed to be living her life over again, and it was a great joy to her that she had given her heart to God when young.

Mrs. Alderson passed away on September 20th, being in her 70th year. Even in her moments of greatest prostration and suffering she repeatedly said: “I am not afraid to die, it’s all right.” She often sang the first part of “Jesu, Lover of my soul,” always ending with the line— “O receive my soul at last.”

On the day of the interment a well-attended memorial service was held in our Durham Road Church, the Revs. E. Phillipson, H. Pratt, R. Clemitson and B. Haddon taking part. For Bro. Alderson and for the family we bespeak the sympathy and prayers of our Church.

She married John Alderson (1842-1916), a PM minister, in the summer of 1870 at Darlington, Co. Durham. Census returns identify five children.