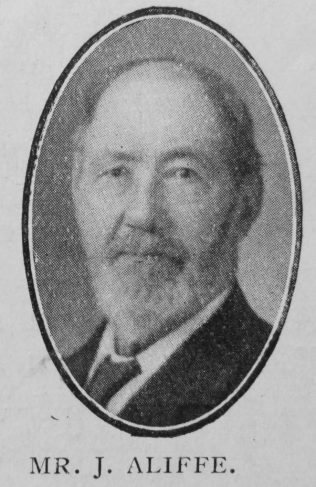 Transcription of obituary published in the Primitive Methodist Magazine by E.L.

The career of James Aliffe drew to a close Nov. 29, 1911, at the age of 73. His toiling days commenced at an incredibly early age. At seventeen he migrated on foot to Ossett. There the labouring youth became a road contractor and engineer, and there the great change in his life occurred in early manhood. This was the beginning of every good thing in the life of James Aliffe. He learned to read. The Bible became his lesson book, the inspiration of his life and his only diversion. Notwithstanding his persistent, almost dogged, qualities in Church life, he was singularly retiring, having little touch with official life; it would almost be safe to say he never missed a service from the time of his conversion to the week before his death. His kindly disposition deepened as the years advanced. He became the sick man’s friend. His horse and conveyance were a public institution when sickness needed them. His riches were in Christ. May God bless the sorrowing widow.

James was born abt1838 at Laycock, Wiltshire. Marriage records identify his father as John Aliffe, a farm labourer. I have not been able to identify his mother.