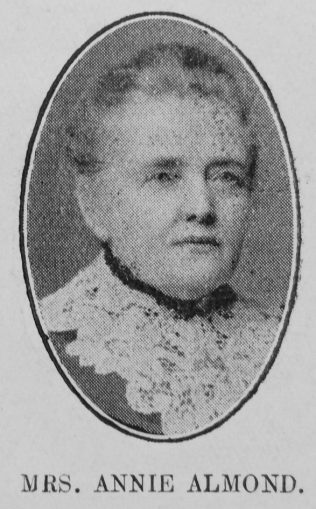 Transcription of Obituary published in the Primitive Methodist Magazine by B.H.

Mrs. Almond (Gateshead) departed this life on Sunday, November 1st, 1908. Being in her seventy-sixth year she was one of the oldest Primitive Methodists in the North of England. She had a close connection with, and a lively interest in, the earlier work of our church, being the grand-daughter of Mrs. Porteus, who for a considerable time occupied a place in the ranks of our ministry. Devoted to the welfare of the church she reverenced the sanctuary and greatly relished the various means of grace.

Whilst appreciating the privileges and joys of church membership, she also recognised and honoured its obligations and duties. Of her value to the church the Rev. John Hallam writes: “What our church has lost is more than we can tell. She reverenced its ministers, she loved its fellowships, she was faithful to its traditions, and generous to its funds.” Mrs. Almond was a real Christian lady, her very face being a benediction. She always had a kindly word for those about her, and she was “fall of good works.” She had a full share of life’s struggles and sufferings and sorrows, but amidst it all she manifested a strength of faith, a cheerfulness of spirit, and a purity of life which were an inspiration to all who knew her.

The beauty and value of her home life and work cannot be over estimated. She was a strength and joy to her husband, and an inspiration to her children. Her whole life was truly beautiful, and her death was quietly triumphant.

The interment took place on Wednesday, November 4th, and was attended by a large number of friends, including many prominent laymen and ministers of the district. An impressive memorial service was held in the Durham Road Church, and the interment ceremony was performed by the Rev. B. Haddon. Great sympathy was shown with Mr. Almond, one of our oldest and most valuable officials, and with the four surviving daughters. May the great Father continue to comfort and sustain them until we all meet again “those whom we have loved and lost awhile.”