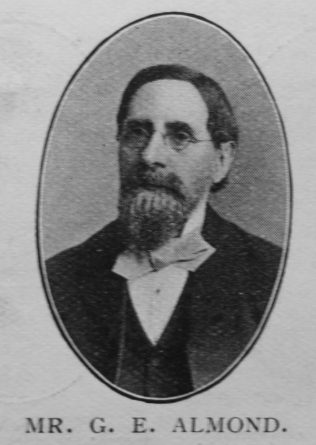 Transcription of obituary published in the Primitive Methodist Magazine by B. Haddon

Gateshead First Station has suffered a great loss by the death of Mr. George E. Almond. He was in his 79th year, and had the distinction of being the oldest tradesman in the town. In that capacity he played a part as honourable as it was successful. His business was really part of his religion, and he never doubted that his success was due to the Divine blessing thereon.

Bro. Almond was a real Christian gentleman of a somewhat exceptional type. His whole life was governed by Christian principles, and was beautified by a Christ-like spirit.

Speaking from a friendship of 47 years, Rev. John Hallam testifies to Bro. Almond’s “irreproachable character,” and says that during all that time “my esteem for his moral character and worth has steadily increased.” He was, indeed, a true man of God, large-hearted, of devout spirit, pure-minded, of exalted character, a man who lived near to God. It was impossible to come into contact with him either in the street, or in church, or in the home, without realising how true all this was, and he himself would have been the first to acknowledge that for it all he owed much to the influence of the late Mrs. Almond whose beautiful simplicity of spirit and saintliness of life impressed all who knew her.

Bro. Almond had an unbroken connection with Primitive Methodism from almost his boyhood, and it is impossible to tabulate all that he did for our Church. His conversion dates from February, 1852, his religious career covering a period of nearly 60 years. He was twice connected with the Carr’s Hill Society, filling the offices of Sunday School teacher and superintendent, and also of Class Leader. He afterwards joined the Nelson Street Chapel, where he became a Local Preacher. Subsequently, he associated with the Worcester Street Mission, which ultimately developed into the present Prince Consort Road Church in the Gateshead Second Station. There he filled some of the most important offices, and did some valuable work. About 18 years ago he identified himself with our Durham Road Church, and of it he was a loyal member, an active official, and a generous supporter to the last.

As a member he greatly appreciated the church services both on Sunday and week-night. As an official he was most faithful in the discharge of his duties. He was trustee for some eight chapels, a member of the District Committee for nearly 40 years, and on two occasions served as Circuit Steward; several times a member of the District Meeting and once elected Vice-President, twice a delegate to Conference, and treasurer of the Local Preachers’ Mutual Aid Association from its commencement.

The end came very quietly, though suddenly, on Wednesday, May 11th. A largely attended Memorial Service was held in the Durham Road Church on Saturday, May 14th. Amongst those present, and taking part in the service, were Revs. J. Alderson, R. Clemitson, J.G. Bowran, H. Yooll, E. Phillipson, James Young, and Mr. W.M. Patterson. The Rev. H. Pratt delivered a suitable address. The interment took place in the Saltwell Cemetery, Rev. B. Haddon conducting the service at the grave.

Census returns identify that George worked as a painter and decorator.