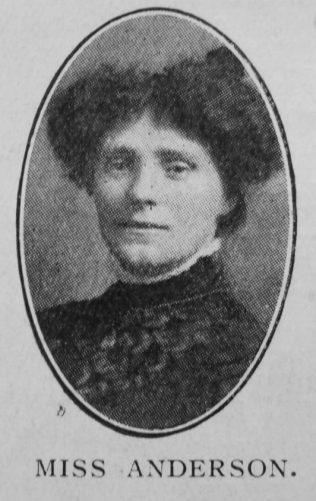 Transcription of obituary published in the Primitive Methodist Magazine by J. Toyn

Not only the Church Street Church, Whitby, but the town and circuit have sustained a great loss by the death of Miss Annie Cooper Anderson at the early age of thirty-seven years. A daughter of one of the most respected families in the town (her mother being the oldest Primitive Methodist in Whitby), she early joined the Church, and for many years rendered invaluable service in every department of work.

A schoolmistress by profession, she was also most successful as a Sunday School teacher. Her services for many years as organist and member of the choir were also highly appreciated, and by her voice and gifts she freely assisted all good causes. She was a most efficient bazaar worker for many years. Towards the autumn of last year her health began to fail, and she fell asleep in Jesus on May 6th, 1912. The funeral service, held at Church Street, was conducted by Revs. J. Toyn and E.W. Challenger.

Annie was born in the summer of 1873 at Whitby, Yorkshire, to parents Edward Anderson, a commercial traveller (1881), and Anne Dawson.