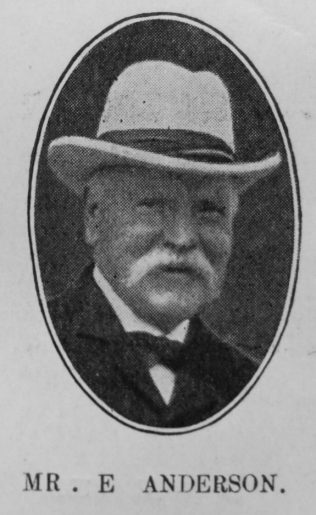 Transcription of Obituary published in the Primitive Methodist Magazine by A.J.B.

In the death of Mr. Edward Anderson the Whitby Circuit has lost a tried and true friend, a consistent member and useful official. Many years ago he joined the Church Street Society at Whitby, and together with his devoted wife and family took the deepest interest in all that pertained to the welfare of the Church. He was a trustee of the beautiful new church at Whitby, and was a regular hearer within its walls, even when deafness in the latter portion of his life prevented him from obtaining the full benefit of the services.

He was undemonstrative in his religious life, but with quiet spirit sought to exhibit the Christly character. He was a genial companion, and by his cheery smile and quaint humour sent many whom he met on their way rejoicing. He was much devoted to his wife and family, and their loss is, indeed, great. His illness was short, but painful. However, he had strength given to bear it with exemplary patience and fortitude.

He died as he had lived in the full assurance of the “good hope through grace.” At the time of his death he had reached the ripe age of seventy-four years.

The interment took place on Sunday, May 23rd, the presence of a large concourse of friends, including some of the leading inhabitants of the town. The former part of the service, which was very impressive, was held in Church Street Church. The Rev. A.J. Bull conducted, and gave a brief address, and was assisted by the Rev. W. Robson. Some favourite hymns of the deceased were sung, and an appropriate anthem was rendered by the choir. At the grave, which is in Whitby Cemetery, the service was conducted by the Rev. A.J. Bull. The many beautiful floral tributes testified to the esteem in which the departed was held.

The widow and family have been much cheered by the numerous letters of sympathy they have received from ministers and others, all speaking of the deep respect and affection felt for our dear brother. May they all meet him again in “the Eternal Light through the Eternal Love!”