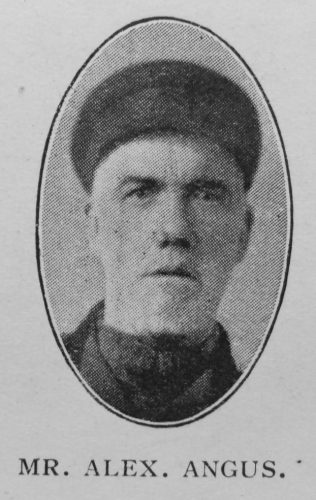 There passed away on June 15th, in the person of Alex Angus, one of the most striking personalities in Eyemouth, and a beloved member of our Church. “Sandy,” as everyone called him, was a genuine bit of “broken earthenware.” Converted during the ministry of the Rev. J. Charlton, he soon became as notorious a Christian as he had been hitherto a wild, drunken fisherman. He had a passionate love for the old hymns, especially what he called “the merry gaun yins,” and his rendering of “In the good old way” at the annual camp meeting’s on the Fort was inimitable.

Sandy became the bosom companion of the young ministers who have been stationed at Eyemouth, and we who knew him best loved him dearly. A more faithful, out-spoken, and devoted friend a young man could not have. Sandy gave our church a standing in that Scotch fishing village. Folk believed in Primitive Methodism because they believed in Sandy. And now he has crossed with the King to the other side and is “Safe in the Glory-land.” Please God, some day we will meet him there.

Sandy was born abt1846 at Eyemouth, Berwickshire, Scotland, to parents John, a fisherman (1861), and Agnes.

He spent his working life as a fisherman.