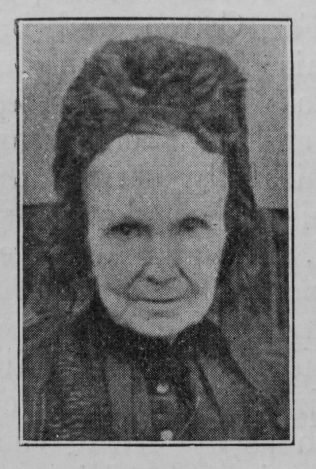 Transcription of Obituary in the Primitive Methodist Magazine by W. Dudley

Mrs. Anthony, of Clunbury, – Leintwardine Circuit, passed peacefully away on May 30th, 1907, in her eighty-seventh year. She was born in the parish of Clunbury, and lived there during the whole of her life. She was a most remarkable woman in many respects, a “mother in Israel,” admired and beloved. For true nobility of character, sweetness of disposition, large-hearted generosity and general fidelity to the principles of her faith, she had few equals. Her home was always open, not only to the ministers and local preachers, but to all who loved the Lord Jesus. She took a deep interest in everything Connexional and was very proud of her church. Our little “chapel” in that village is a room “fitted and prepared” from among the out-buildings of the farm upon which she resided; and has been kept going many years mainly through her personal interest and the influence of her good name.

But her sympathies extended far beyond the limits of her own denomination. She was greatly interested in whatever had to do with the progress of Free Church principles, and would talk quite enthusiastically of the questions of the day. Her loyalty to the church of her choice in a district where Nonconformity is “tolerated,” and her frank avowal of what she believed to be right will long be remembered by those who have felt the magnetism of her faith and love. For some time past she had been patiently waiting for the call, and no words can describe the beauty of her eventide.

According to her oft-repeated wish, she was interred under “The Burial Laws Amendment Act” by the writer (an old friend) and Rev. E.J. Hull (Circuit minister). Several of the circuit officials were present, and also ministers and friends from adjacent circuits.

The simple impressive service was, as one of her children observed, “just what she would have liked.” It was felt by all that a truly noble soul had gone hence, and we give God thanks for a life whose sweetness lingers in the air, and whose fair deeds it will be a joy to think of.

Jane was baptised on 14 January 1821 at Clunbury, Shropshire. Her parents were Lyttleton and Rebecca.

Jane married Thomas Anthony (abt 1822-1900 in the summer of 1844 at Clunbury, Shropshire. Thomas was a stone mason, who later became a grocer, farmer and postmaster. Jane assisted in the business. Census returns identify eight children.