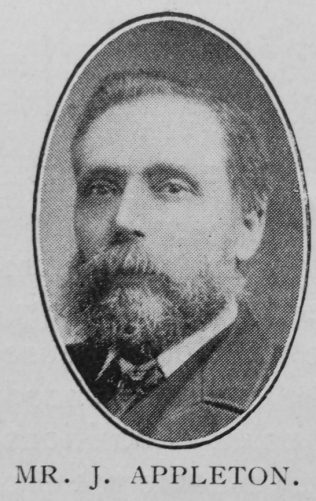 Transcription of obituary published in the Primitive Methodist Magazine by G.T.

Joshua Appleton came from Bicenacre, Essex, where he was converted, put upon the plan, and soon offered a place in our ministry, which he declined. He passionately loved his church, and amidst many changes remained a loyal member. He came to London forty years ago, and held the superintendency of Deptford, and subsequently of Laud Street, Croydon, Sunday Schools. He rendered the same service at Aldershot, where he had charge of the Soldiers’ Home. He once attended District Meeting and Conference.

The last few years of his life were spent in great affliction. “He was made perfect through suffering.” His visitors were delighted with his courageous and submissive faith. Said a minister, “He was a great saint, and it was a privilege to visit him.” Another wrote, “He was the most heroic man under suffering I ever knew.” He died in March, 1913, aged seventy-four years. His funeral was largely attended.

Joshua was born abt1839 at Woodham Ferrers, Essex, to parents Christopher, who worked the land (1841), and Elizabeth. He was baptised on 7 June 1840 at St Mary the Virgin, Woodham Ferrers.

Joshua died in March 1913 in the Croydon Registration District, Surrey.