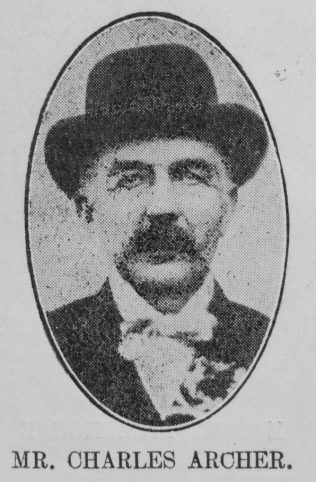 The year 1908 saw the passing of Mr. Charles Archer, who for many years had been a member and official of Hainton Avenue Church, Grimsby. He was born at Authorpe in Lincolnshire, in 1846, and at the age of nineteen became converted, joining the Wesleyan Church in his native village. But on coming to Grimsby nearly thirty years ago he associated himself with our church, and continued a trusted and honoured member thereof, till called to the higher service of heaven.

He was never ambitious for place or power, but was one of those unobtrusive men to whom Methodism owes so much. As an exhorter it was his delight to speak at the street corner, and also to take a service in some village chapel when appointed so to do. In the church he acted as sidesman, making it a matter of conscience to be there in time, and was always ready to welcome strangers with a hearty shake of the hand. But it was perhaps as a class leader that he most excelled. He was not only regular and punctual at the weekly meeting, but always visited the sick and aged ones of his class, so that he endeared himself to all, both old and young.

At the time of his decease, which was sudden and  unexpected, he appeared to have before him many years of useful service. But it was not to be. He had been with his devoted wife to spend a holiday in the home of his youth. This he had enjoyed fully, and attending the village chapel with its hallowed memories had entered heartily into the services, returning home the following Tuesday apparently in the best of health. The next day when engaged at his work he was seen to fall, and in a few minutes all was over. ‘‘ He was not, for God took him.

His funeral was largely attended, and was conducted by the writer, the Rev. W. Pigott, D.D., an old friend of the deceased, giving a most appropriate address. And thus were laid to rest amid many tokens of sorrow the mortal remains of one who in life had done what he could. Many will cherish the remembrance of his goodness. The memory of the just is blessed.