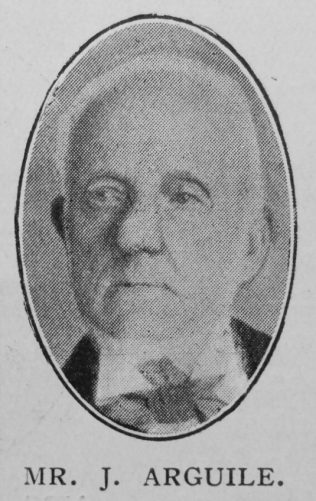 Transcription of obituary published in the Primitive Methodist Magazine by M.K.

Mr. Arguile, senior local preacher and assistant circuit steward in the Hinckley Station passed to his reward on October 28th, 1912. the whole of his life was spent in the village of Barwell. Converted at the age of 18, eighteen months later he began a work as a local preacher, which continued for sixty-two years.

Having a retentive memory, he could quote the Word more fully and correctly than any other man it has been my privilege to know.Possessing a wonderful voice, he was in great demand for camp meeting services. He represented the circuit in at least thirteen District Meetings and always took a prominent part in the services. For many years he was a class leader and was always a generous supporter of the Missionary and other Connexional Funds.

James was born abt1829 at Barwell, Leicestershire, to parents Robert Arguile and Elizabeth Needham.

He married Martha Foster (abt1826-1902) in late 1882 in the Hinckley Registration District, Leicestershire.