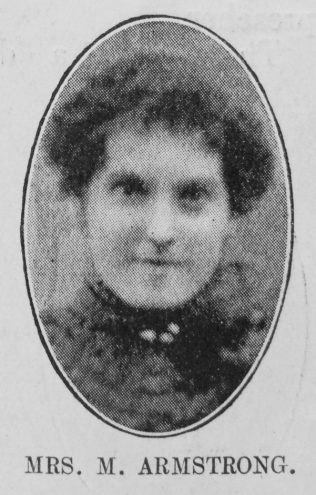 Transcription of Obituary published in the Primitive Methodist Magazine by G.F.

Maggie Armstrong was a bright soul. She did not live long, but she lived well. She was born a Primitive Methodist, and died in the faith of her parents.

Her father and mother, Mr. and Mrs. John Morpeth, have been long and loyal members of our church. They resided formerly at Bebside and Ashington and now live at Seaton Hirst (Northumberland).

Maggie was carried to church as a babe. She inherited her parents’ devotion for her Society and her Saviour.

She was born at Bebside on July 11th, 1882. From childhood her life was beautiful and bright. She loved her Sunday School, was devoted to her Christian Endeavour and when a young ladies’ class was inaugurated at Ashington, she became one of its first members.

On June 9th, 1904, we married her at Morpeth to Mr. Thomas T. Armstrong, the Society steward at Seaton Hirst.

The union was soon to be severed, for on May 13th, 1908, her call came to ascend to God. There was something pathetic in her passing. The children given to her were plucked in the bud.

They soon passed away. The young mother, frail at the best, broke down in health. She made a courageous struggle. What a good heart she kept throughout! Nursed by her dear mother, she lingered in her weakness, whilst all who loved her, hoped she would overcome and be restored.

It had not, however, to be. Cheerful to the last, when the end came, it was sublime. Her closing moments were heavenly. With a countenance beaming with spiritual radiance, and with hands held out to meet her Lord, she passed to the other side. To her, it was sweet to die.

She was buried on Sunday, May 17th. What a host of friends gathered for her funeral! A service was held in our Seaton Hirst Church, conducted by Revs. G.R. Bell and George Fawcett.

As the friends left the graveside, close to where her children lay, the profoundest sympathy went out towards the husband, parents, brothers and sisters of this bright young soul, She was for the eternal morn.

Margaret (Maggie) was born on 11 July 1882 at Bebside, Northumberland, to parents John, a coal miner, and Sarah. She was baptised on 1 August 1882 in the Ashington and Newbiggin P.M. Circuit.

Maggie died on 13 May 1908 at Seaton Hirst, Ashington, Northumberland.