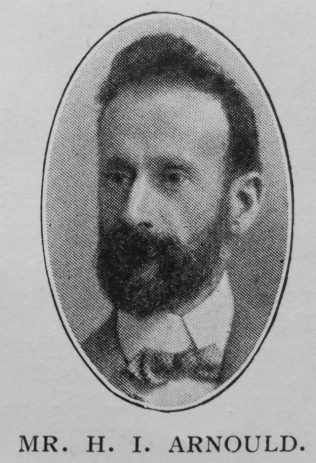 Transcription of obituary published in the Primitive Methodist Magazine by Jos. Wellings

With profound sorrow we record the death of Mr. Henry Isaac Arnould, July 2nd, 1910, at the age of 55 years.

A son of Henry Isaac and Susannah Arnould, of Plumstead, he was converted about 1872-3, his early years of Christian service were spent in our Church at Plumstead, where he successfully filled the office of Sunday School teacher, afterwards Sunday School superintendent for five years, society steward for ten years, and trustee of several chapels in that Circuit, besides being an acceptable local preacher since 1883.

Some eleven and a half years ago he removed, with his wife and other relatives, to Bournemouth Circuit, where he has served well as local preacher, Sunday School teacher, class leader, and society steward at Pokesdown, and latterly as junior steward of Bournemouth I., besides being a trustee for several properties in the Circuit.

Brave and true, a man of sterling principle, large-hearted and sympathetic, courteous and considerate, his smiles and cheery words were an inspiration to many. Though a busy man, he found time for Biblical and general reading, private and family prayer, and was regular in his attendance at the public services. He was a shrewd and wise counsellor, a willing worker, and a very liberal supporter of the work of God.

His body was laid to rest in Bournemouth East Cemetery on Thursday, July 7th. Many ministers and friends were present, and shared in the tributes of esteem paid to the memory of the departed.

Henry was born in 1855 at Gravesend, Kent, to parents Henry Isaac Arnould and Susannah Foster.

Census returns identify that Henry was a builder and contractor.

He married Hannah Jochebed Frost (1852-1932) in the spring of 1878 in the Woolwich Registration District, London.