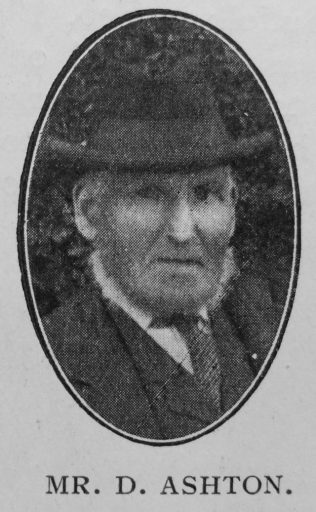 Transcription of obituary published in the Primitive Methodist Magazine by A.R.

The Walpole Marsh Society have sustained a great loss in the death of Bro. D. Ashton, September 16th, 1911. He was the oldest member of this Society, having been with them for fifty years, and though in that time he witnessed great changes his faith never wavered. He was a man of quiet demeanour but of sterling character, he had a long record in Sunday School work, as teacher and then later, for twenty years as Superintendent, his work will never be forgotten.

We are told that years ago, when this Society had no appointed chapel keeper, this good brother went to and fro Sunday by Sunday and lit the fire in the school so that all would be ready by the time the children came. He shared the responsibilities of Trusteeship, was a Class Leader, also the President of the Band of Hope. The present Society Steward said he was always there, he was not a oncer. No man was more faithful to his responsibilities, he had nobly borne the burden and striven long and faithfully in the fight.

Though for some time he had failed in health, his concern for spiritual things remained firm and full to the last. Our sympathy goes out to the sorrowing family that are left and we pray that they may follow in the steps of their father, who has “kept the faith” even unto the end. We laid him to rest on Wednesday, Sept. 20th. We had the first part of the service in the chapel, many of the children came, and but for the rain would have followed him to the grave.

We laid him to rest in the Walpole St. Peter’s Churchyard, the Rev. A.E. Rose officiating. On the following Sunday afternoon a memorial service was held, conducted by the Superintendent Minister of our Circuit.