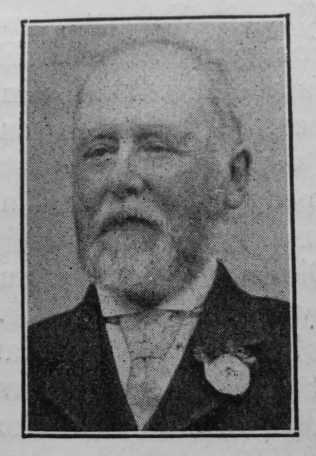 Our departed brother, James Aspin, was born at Sunnyside, Crawshawbooth, on June 22nd, 1839, and in the same place after sixty-eight years he died July 2nd, 1907. On July 6th what was mortal of him was laid to rest amid kindred dust in the Sunnyside Baptist Churchyard. The service at the grave was conducted by the Rev. J. Phillipson, the lesson being read by the Rev. G. Armitage. Rev. J. Yearsley gave a touching address on the Christian character, devoted service, and brotherly spirit of Bro. Aspin.

When Bro. Aspin had reached manhood, having lived a careless worldly life, he was startled by the unexpected death of a near friend. This circumstance came to him as a great shock, and it revealed to him his need of God. He went to a class meeting, and there in fellowship with God’s people he sought and found salvation. “Yes,” he, himself, writes on this great event, “It was there and then, thank God, I found forgiveness through the blood of the Lamb!” This was the great turning point in his life. It stirred his whole manhood, and it gave him a thirst for knowledge. It roused him up to the duty of self-improvement. His outward life was never wide; in the valley where he had lived he died. But his inner life was not confined by the hills of his native place. He began to take an intelligent interest in the social conditions of the people: he sought to understand the principles of educational and religious liberty; he took a deep interest in the great men and movements of his time. He ever sought to know God better and His love revealed in Christ, and of man and of a Christian brotherhood. Thus he grew in depth and breadth of spirit, and was always ready on these great questions of Religion and Life to give a reason for the hope that was in him.

In all the outlook of his life – an outlook cherished by a sympathetic and reflective mind and widened by extensive reading – he was yet loyal and devoted to his own church. He delighted in our church history, and especially in the early triumphs of our fathers. A great impression had been made on his mind when he was a boy by hearing Hugh Bourne preach in the open air at Crawshawbooth.

A memorial service was conducted by the writer in our church at Crawshawbooth on July 14th, when the high qualities of Bro. Aspin’s Christian character, his usefulness as a preacher were brought before a large and sympathetic audience. Mr. J.S. Pickup also spoke briefly of the great services Brother Aspin rendered to the Sunday School at Helmshore, when he lived there years ago. He (the speaker) testified that many of the young men in the Bible-class taught by him (Brother Aspin) had been led through the influence of that teaching to a religious life. Mr. Pickup said that he personally when a youth owed much to the example, teaching, and preaching of James Aspin.

James was born to parents James, a calico printer, and Betty.

He married Margaret Whitaker (abt1841-1914) in the spring of 1860 at Crawshawbooth, Lancashire. Census returns identify nine of eleven children.