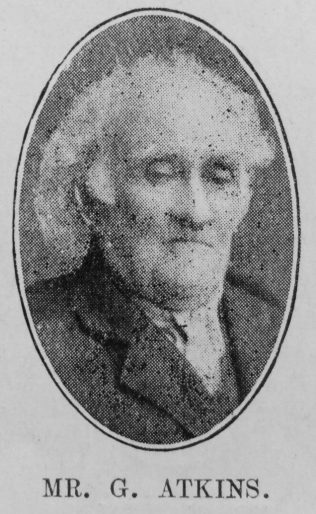 Transcription of Obituary published in the Primitive Methodist Magazine by S.A.B.

MR. GEORGE ATKINS, of Curzon Street Church, Leicester Third Circuit, who passed away April 22nd, 1909, was born at the village of Whetstone, August 19th, 1826. When, more than sixty years ago, the Leicestershire countryside was missioned by our people, the conversion of George Atkins was one of the fruits of the movement. To Miss Thornton’s influence especially, George Atkins attributed his conversion, and she eventually became his wife. Their connection with the church was unbroken, their attendance at all the services and means of grace regular, their life exemplary.

For a time they were the chapel keepers of our Peel Street Church. Their principal relationship, however, was to the Curzon Street Church, which they attended from the erection of the chapel fifty years ago. For a number of years Mr. Atkins rendered useful service as a Sunday School teacher. Not a versatile and variously gifted brother, nor fitted for conspicuous place, he yet served his Lord faithfully in his degree, and by his quiet goodness made himself generally esteemed.

The death of his excellent wife rather more than six years ago was a great loss to him, and he has now joined her in the beatific life.

He married Martha Thornton (1830-1902) in the spring of 1858 at Leicester. Census returns identify three children.