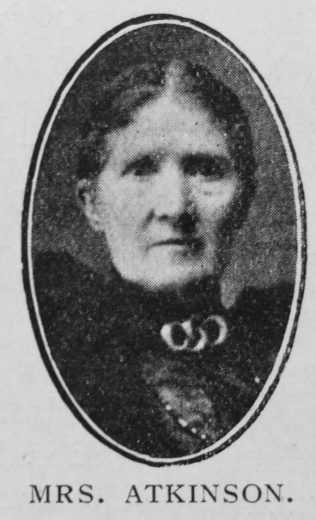 Mary Atkinson, wife of George Atkinson of Tebay, and mother, of the Rev. W. Atkinson, passed away on April 2nd, 1911, aged sixty-five years. Born at Tebay, Mrs. Atkinson was the youngest daughter of the late George Jackson, that stalwart founder of Primitive Methodism, who was so widely known and highly respected in Westmorland. His maxims were very largely woven into her character. Her conversion took place when she was a girl of twelve.

Mr. and Mrs. Atkinson founded the Tebay Sunday School, when the first chapel was erected in 1865, and the service they have put into that school eternity only will reveal. Every Sunday morning no matter what the weather, the Sunday School must be attended, and what a glad smile Mrs. Atkinson had for each teacher and scholar. In all departments of Church work Mrs. Atkinson occupied a foremost place, and now that she is gone she is greatly missed.

The funeral took place on Wednesday, April 5th. The coffin was previously carried to the Primitive Methodist chapel, where many friends and neighbours took a last look at one they dearly loved. The first part of the funeral service was conducted by the Rev. R.B. Hanley, S. Jackson (brother), James Mason (nephew), John Parkin, Appleby, and James Wharton, Kendal. Mr. Wharton, who had known Mrs. Atkinson all his life, in a beautiful and telling address, said: “She was the finest Christian woman it has been my privilege to know.” A memorial service was held in Tebay Chapel on Easter Sunday evening, the preacher being Mr. John B. Bayliffe (nephew), Connexional evangelist.

Mary was born in the spring of 1846 at Tebay, Westmorland, to parents George Atkinson, a farmer (1851), and Ann Bland.