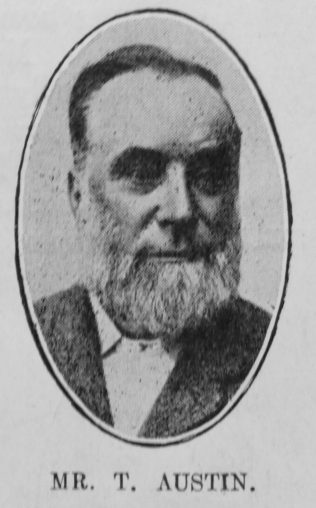 MR. T. AUSTIN was born at Hannington Highworth, November 25th, 1842. His early life was thoughtless and trifling. Going one Sunday evening to the Primitive Methodist Chapel with some others to have “much fun,” the words of the preacher struck home, and under deep conviction he came to the penitent form. His conversion led to the connection of the whole family with our Church.

Our brother became a local preacher at the age of nineteen years, and has done a great amount of good work in this circuit and Faringdon. Mr. Austin was of genial and kindly disposition, and generally beloved. He was hardly ever absent from the public services. His illness was of very brief duration. He leaves a widow and some grown-up children to mourn his loss. The funeral was largely attended, and sincere respect paid to his memory.

The writer conducted a memorial service, when many friends spoke of his early devotion to the Church.

For twenty years he was superintendent of the Sunday School, and played the harmonium for a long time at our Highworth Society. His cheerful, faithful life is greatly missed by the family and church.

Thomas spent his working life as a baker.

He married Selina Ford (1844-1911) in the spring of 1863 in the Highworth Registration District, Wiltshire. Census returns identify six children.