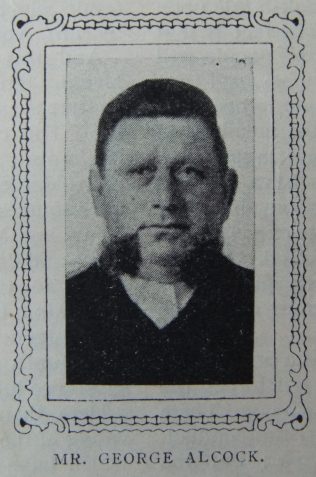 Bluff, hearty, honest George Alcock is the Steward of the Graytonthorpe Society, in the King’s Lynn Circuit. Graytonthorpe is a small village three miles from the nearest railway station, and eight miles from the Circuit town. The chapel, which stands severely alone, was erected in the year 1902. Prior to its erection the church worshipped for eleven years in the house of Mr. Alcock’s father, and for fourteen years in Mr. Alcock’s own home.

As Society steward our brother is assiduous in the discharge of the duties consequent upon the holding of that important office. Though not an attender of the Circuit Quarterly Meeting, his report and the quarterly allocation are always there. He is faithful in his Stewardship, and looks well after the interests of his own Society. He is also the treasurer of the Trust, and took an active part in the erection of the chapel, also of the vestry recently added. There being no musical instrument in the chapel, he successfully performs the duties of precentor, and strikes up old time Primitive Methodist tunes with such heartiness and vigour that you would almost imagine that William Clowes, Robert Key, Richard Jukes and other worthies were once more in our midst. Then, too, for thirty-nine years he has been Missionary Collector, and during this long period the yearly sum collected has averaged £2 I0s. For the past ten years he has had no less than £3 each year in his box.

We are glad to introduce this thorough-going, earnest, typical Norfolk Primitive Methodist to the readers of the MESSENGER, and trust that, although our brother has been a member of our church forty-one years, he, his wife and family who are with us, will long be spared to serve the church of his birth

George was born abt 1854 at Gayton Thorpe, Norfolk, to parents George and Mary. George, senior, worked the land.

George’s death was registered in the 3rd quarter of 1929 in the Freebridge Lynn Registration District, Norfolk.