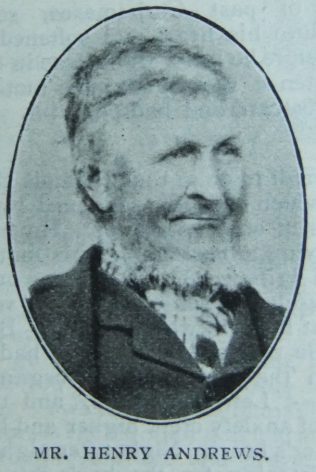 Mr. Henry Andrews. – The sudden death of Henry Andrews, April 14th, 1907, was a great loss to our Kelsale Church. He was converted some fifty-six years ago largely through the death of a much-loved child, aided by the prayers and example of a devoted wife who had found the Saviour a little while before. He at once joined our Kelsale church with which he remained in fellowship till his death. For more than half a century our brother lived a quiet and peaceful life, and sought to adorn the doctrine of God our Saviour in all things. For many years he was a diligent and useful teacher in the Sunday school, and was regular in his attendance at the means of grace week-day and Sunday. In the class and prayer meetings, he took a deep and genuine delight. For the spiritual welfare of his large family of sons and daughters he was ever deeply concerned, and had the joy of seeing most of them brought to a saving knowledge of the truth; several of them are useful and much esteemed members of our church. For thirteen years afflicted severely with rheumatism, our brother was for three years of that time unable to travel far from his own home. This rendered him latterly unable to attend services, which was to him a real grief. Then the death of his much loved wife, a few months before his own, was a great loss; but these things he bore with commendable fortitude and patience. Much of his time during this season of trial was spent in reading his New Testament, and in prayer. He often pleaded with great earnestness for the spiritual welfare of his children, and the prosperity of the church and school. On Sunday April 14th, he passed peacefully away to join the realms of the blest.

“O, may we triumph so,
When all our warfare’s past,
And dying find our latest foe
Beneath our feet at last.”

Henry was baptised in the House of Industry, Bulcamp, Suffolk, England on 14 January 1924. Only his mother, Lucy, is named.