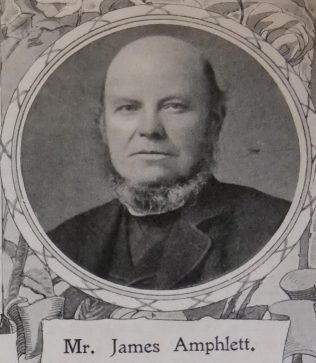 Mr. James Amphlett has been Steward of the Worcester Circuit for thirty-one years. Born at Martley in 1840 he removed to Stourport and afterwards to Malvern, where he commenced a grocery business in 1865. Converted under the preaching of the late Rev. J.R. Taylor and the late Edward Morris, of Kidderminster, he was soon afterwards appointed Society Steward, a position he still holds. In 1869 he became a local preacher and has rendered efficient service. He is a trustee of the Chapel and largely through his influence it has been debtless for many years. His foresight and management as Circuit Steward relieves the ministers of much worry and care, and funds are never far behind. He is also Trust Treasurer and School Superintendent, and has been delegate to District Meetings and once to Conference. His geniality and generosity have won for him the esteem and affection of all who have the privilege of his friendship.

James was born in 1840 at Martley, Worcestershire, to parents John and Mary. John was a farm labourer.

The 1861 census records that James started his working life as an agricultural labourer, before his career as a grocer.