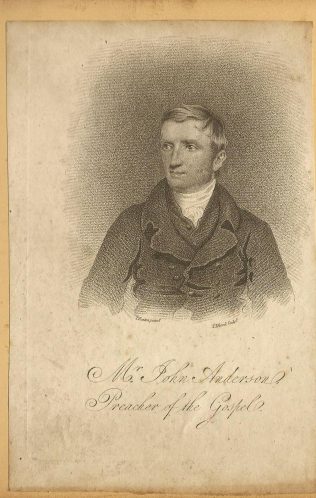 John was born in Scotland abt 1806. His father was an elder in the Presbyterian Church.

John was attracted by the preaching of William Clowes and John Nelson and joined the first PM Class formed in Newcastle upon Tyne.

John was briefly employed as a Presbyterian Missionary to Scotland but after a few months returned to North Shields and reunited with the Primitive Methodists. He became a local preacher. He later moved to South Shields where for a short period of time he was a hired local preacher.

John attended the District Meetings and went to Conference as a delegate.

His obituary records that his sermons, mostly on peculiar subjects, but never treated in a peculiar way, showed a powerful and comprehensive mind. many of his sermons were worth their weight on gold.

He endured suffering in his life. There was a spell of financial embarrasment in his early life and later he suffered the beravements of his wife and only son.

The 1851 census records his occupation as bootmaker. Later he is identified as a colliery agent. About 1870, John was elected by the Jarrow Ward to the town council.

Note: The picture in the Primitive Methodist Magazine is presumed to be of John. John Ramsey Anderson is the only John Anderson known to have an obituary published in the PMM. Please comment if you have any different information.