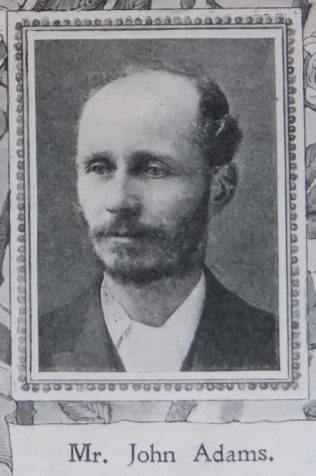 Mr. John Adams was born at Wombell Main near Barnsley, February 24th, 1857, and was brought up among Congregationalists. When he moved to Sheffield in 1878 he threw in his lot with our John Street Society, and was an earnest worker. Promotion soon rewarded his business tact, under the Refuge Assurance Company, and at Lincoln he associated himself with our Portland Place Church, where he married the lady who has been his true helpmeet. Twelve years ago he came to Nottingham, and for most of that time has been Circuit Steward. Choirmaster, Treasurer for the Trust and the Nottingham Primitive Methodist Council, he renders valuable service. He is now an Inspector for his Company. The Chancellor of Nottingham III is unassuming in manner, a man of piety and integrity, shrewd withal, yet kind and courteous. Like his late uncle Henry, of Sheffield, he is a man of a very generous spirit.

John was born in 1857 to parents William and Miriam. William was a coal miner.

Before moving to Sheffield, John worked as a coal miner.