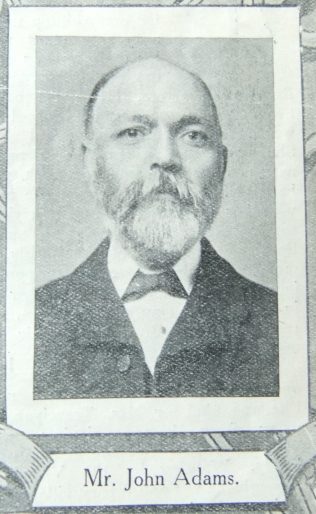 The Chancellor of Burton-on-Trent Second Circuit is a native of Newhall. His father was a prominent figure in the Society of this mining centre. The son became an exhorter on the plan at the early age of sixteen, and only once in thirty years has he failed to be in his place in the pulpit, and then it was quite unavoidable.

Mr Adams is a good official, judicious and far-seeing. He takes a keen interest in the affairs of his Circuit, and does not forget to cast an occasional glance at fields beyond. He is an excellent preacher and always welcomed by the congregations of three Circuits. He is trustee of several chapels in the neighbourhood, and about three years ago was elected to the Chancellorship of his own Circuit.

Mr Adams came to Burton in 1893 and settled at Stapenhill, on the Derbyshire side of the Trent. Here he has rendered his most conspicuous service.

John worked as a colliery clerk.