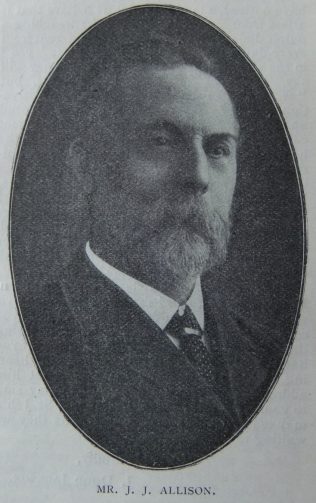 As to John James Allison’s age, I make a bold dash at sixty. He may not look it, but as will appear in the sequel, he cannot be much less. All these years he has enjoyed the unspeakable advantage of having lived in this south-western corner of Northumbria, a land of mountains and of floods. Here he has taken root down ward and borne fruit upward. Descended from godly parents, who were members of our own Church, he was converted during a revival at Catton when just a boy. He served two or three years’ apprenticeship to preaching by accompanying older brethren to their appointments, and in the December Quarterly Meeting (1864) was put upon the plan. The Revs. William Fulton and William Bowe were then the Allendale ministers, and that, of course, is nearly half-a-century ago. But having obtained the help of God, Mr. Allison continues to witness to this day. He preaches nearly every Sunday, and no man in the dale is more acceptable to the Churches. In this important work his dynamic is derived from a strong sense of duty and a knowledge of the will of God. He is, I believe, rather proud of the fact that only once in his career has he failed to take his preaching appointment, and then because of a storm! One wonders where that record can be paralleled? Then, besides, he is a Class leader, the Superintendent of the Dunday school, and the Steward of the Circuit.

Mr. Allison is a deeply religious man. He has a religious nature. He delights in the devotional hour, and he loves the means of grace. Though daily immersed in business he is seldom absent from the services of the sanctuary. He enjoys a prayer meeting, revels in a good sermon, and brings a mind and soul prepared to absorb the best message any preacher can give. When an after-meeting follows, as on Sunday evening, he flashes back the discourse adorned and embellished in the alembic of his own heart and soul. It is said some ministers in the Church habitually preach above the heads of their hearers. That surely is an invention of the evil one! If it is not so let such illustrious pulpiteers pray to be sent to the dale where they will find scope for their colossal genius. Mr Allison is a deeply-versed student of the Holy Scriptures, and has a large and well used library. In his home the newest and the best books are always tumbling about, and he faithfully subscribes to, and reads, the literature of his own Church. He loves Primitive Methodism; freely acknowledges the good she has done him; is proud of her traditions both local and general, and is keenly interested in all her enterprises throughout the world.

As a preacher, Mr. Allison is especially exegetical, often biographical, and always practical. He sinks his mind into a Biblical narrative until it is rooted and grounded in the truth. Then draining the broad watershed of life as known to himself he blends the two (knowledge of truth and life) into a useful discourse. Each of his sermons has “heaven for its father and earth for its mother,” as Tholuck said it ought to have. He has a clear pleasant voice, and all the time he is speaking there can be discerned a yearning undertone of sympathy and love. As you listen you are first inclined to think there is only a cold, intellectual presentation of the truth. But in reality there is an incandescent flame glowing through the whole nature of the man, and before he is far on it kindles every soul in the audience. His is not the small-pot-soon-hot style of eloquence that Emerson stigmatises. Once when preaching at Catton he referred to the immense services Dr. Parker (himself a redoubtable Northumbrian) had rendered to the Church of Christ. A lady present was manifestly much pleased, and she turned out afterwards to be Dr. Parker’s sister who at that time was residing in the dale. Negatively Mr. Allison may be described as an official who is neither a gusher or a pusher. Into the business meetings of the Church he carries that excellent oil that smoothes waters apt to be perturbed. He always speaks wise words wisely. He is rich in saving commonsense, suave and conciliatory. A kind man and charitable. He wears the aureole of the peacemaker. When work is put upon him no promises will be made, but when the hour strikes the task assigned will be completed beyond the point of criticism. He has indeed a love for every good cause.

But our friend’s activities are not confined to the Church. He is in touch with most of the public affairs of Allandale, and no man as a publicist commands more confidence among the dalesfolk. He is Chairman of the Parish Council, and always in the van of improvement. He was Chairman of the old School Board, and a progressive educationalist. At present he presides over the Council School Managers of this far-spreading area. Recently he has taken great interest in the erection of a Temperance Hall built for the social welfare of Allendale Town. He is one of the Trustees and Treasurer of the Temperance Council. Mr Allison is a strong Free Churchman, and brings that broad outlook to all public questions which is the glory of the unestablished Churches. His “ism” never makes a schism. He endeavours to apply the law of Christ to the whole round of life. And while the price is not quotable at which he would yield a principle, he is nevertheless easy to be entreated and pleasant to work with for the common good. Strength, immense weight of character, and commanding influence have accrued to him by a blameless life spent all in one neighbourhood, and the salutary touch of modernity has been added by frequent excursions into the more stirring world beyond the dale.

Mr Allison has unfortunately known that stunning trial and sorrow of life that ploughs furrows where the eye of mortal cannot penetrate. In Allendale Town Chapel, close to a tablet commemorating the Rev. John Gill, there is another erected by the British Women’s Temperance Association to the memory of Susanna Allison. The dead are commemorated where when living they worshipped, as they always ought to be. It is five years since Mrs. Allison went to be with Christ, which is very far better, and it is not difficult to imagine what her departure meant to him. There is a family of five sons and three daughters, all well-equipped, and it is a gladsome thing to see how they cling to their father and to each other. The dale cannot keep all her bright boys within her borders, and most of Mr. Allison’s sons are scattered to distant places in pursuit of their avocations in life. But they retain a warm love for their native dale, and frequently meet together in the old home. The eldest son is a schoolmaster in West Allen and a most acceptable local preacher. All the others are more or less intimately connected with the Church, and render valuable service in one or another form. The Misses Allison superintend their father’s house, keep an open door for the prophets that come this way, and are much interested in the work of the Church and other good causes.

Now though so well forward in the measure of man’s days, Mr. Allison seems to be just in the heyday of his work and power. His eye is not dim: his natural force is not abated. He is still an energetic man, full of vim. He has rendered good work; he is capable of rendering good work for many years to come. If God spares his life I prophecy that he will by patient continuance in well doing seek for glory and honour and immortality. For Christ is his Captain and suffices him. Many people need ever-increasing doses of excitement and blare of many trumpets to get out what little is in them, but John James Allison is of that noble army of workers who quietly and persistently build up the Kingdom of God year by year. He shuns the emblazonry of the house-top. So far from courting publicity he positively dislikes it. Even this slight sketch, limned for the readers of THE CHRISTIAN MESSENGER is almost at the risk of the poor writer losing a quarter’s stipend; while the photo, taken specially for the occasion and sat for only after repeated entreaties, is the only one of its subject imprinted during the last twenty-five years. But the risk is freely taken as he is worthy to whom this tribute is paid. And is said of a greater:

“Not once nor twice in our rough island-story,
The path of duty was the way to glory;
He that walks it, only thirsting
For the right, and learns to deaden
Love of self, before his journey closes,
He shall find the stubborn thistle bursting
Into glossy purples, which out-redden
All voluptuous garden-roses.”

John was born abt 1845 at Allendale, Northumberland to parents William and Jane. William was a lead ore smelter and farmer (1851).

His obituary records that John served as a local preacher for Fifty-four years and was Circuit steward for twenty-seven years.