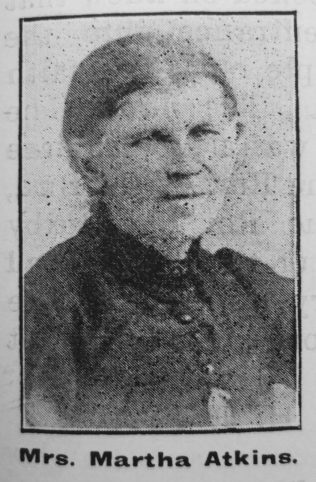 Transcription of Obituary in the Primitive Methodist Magazine by G.E.A

By the death of Mrs. Martha Atkins, the Curson Street society, Leicester third circuit, has lost one of its oldest members. The subject of our sketch was the daughter of Mr. John Thornton, whose name will ever live in the history of Primitive Methodism for his worth and work in the early days of our beloved Connexion in Leicester. Into the home of this godly and now sainted life, Martha was born on Dec. 31st, 1830, when persecution was rife and the battle for human existence intensely keen, Notwithstanding the adverse circumstances that surrounded the home the atmosphere was pure and untainted, for all its inmates loved God and delighted to serve His cause.

Martha sought and found the Lord Jesus Christ in early days, and at once began to work for Him. She rendered excellent service to the church of her choice as a class leader, and took great delight in missioning the adjoining villages, though the pilgrimages were often long and wearisome and not infrequently dangerous.

In the year 1858 she was united in marriage to Mr. George Atkins, who now mourns her loss. As a wife and mother, her duties became a pleasure, and although her task was arduous she never shirked it, often working early and late to make ends meet. Small wages and frequent affliction led to no repining, and through it all it was her great concern to provide her children with the best religious literature, so that by precept and example she might lead them into the way of truth.

During the last four years of her life she was unable to walk across the house. But, though she suffered the most excruciating pain she never murmured, but ever prayed that she might be patient to wait the Master’s time. Her end came gradually, and on October 31st, 1902, in the 72nd year of her age, she peacefully departed to be with Christ, leaving a husband, a daughter and two sons, both of whom are local preachers and class leaders in the Primitive Methodist Connexion.

Martha was baptised on 16 January 1831 at Leicester, Leicestershire. Her parents were John Thornton, a framework knitter, and Sarah Lees.

Before her marriage Martha worked at needlework (1851)

Martha married George Atkins (1826-1909) in the spring of 1858 at Leicester. George worked as a porter. Census returns identify three children.