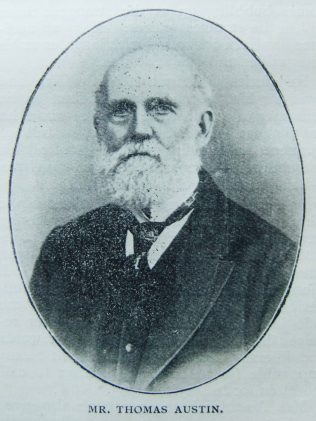 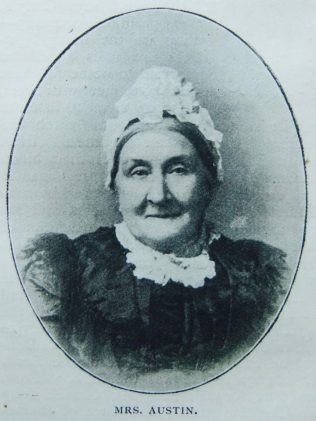 Transcription of Sketch in the Christian Messenger by H. Owen

“Great men,” says Carlyle, “ are profitable company – they are the living light-fountains it is good and pleasant to be near.” Yes, we love to meet with them, to study them, to listen to their wise sayings, and to catch inspiration from their earnest lives. In Mr. Thomas Austin, of Hatherton, on the Crewe Circuit, we have a great man in more senses than one. He was born at Hatherton on 23rd of July, 1829, and has lived there ever since, with the exception of three or four years which were spent in London. His early training was, strictly religious, but he felt, as a youth, that he needed something that his good training had not imparted, and at sixteen he had the joy of reporting that, in a cottage service held in the home of Samuel and Sarah Dobson, he had given his heart to the Lord. His change of life was thorough. From this time forward he threw himself fully into Christian work. The force of character which he possessed as a youth was now directed in all its strength to the service of Christ. He rarely missed an opportunity of attending divine service, or engaging in any work for the Master.

When eighteen years of age he was invited to accompany Mr. Thomas Wood, a noted and very useful local preacher, to his appointments, and soon was received on full plan. He readily proved that he was a man of great natural ability, his intelligence being of no mean order. For over 54 years he has preached the Gospel with great effect. His services have been, and are still, greatly appreciated at Camp Meetings and “Specials.”

He is still one of the busiest of men. While he keeps a grocery establishment and Post Office, he also cultivates a small farm. But yet finds time for all his Christian Work and Parish Council duties, having been on the Council since its inception, when he was made Chairman.

His work as a class leader, Sunday School teacher, Society Steward, Treasurer of the Trust Estate, etc., has been highly appreciated, as may be seen from the testimonial presented to him by the officials of the Crewe Circuit, when be celebrated his Jubilee as a preacher four years ago. It reads:- “Dear Brother, we avail ourselves of the opportunity afforded by the special services in connection with the enlargement and renovation of your chapel, to congratulate you upon the celebration of this your Jubilee as a Local Preacher. For half a century you have successfully laboured amongst us in promoting the interest of the Church of Christ in this locality, and throughout the district, and always welcomed to your home any fellow workers, and many have thankfully received your kind hospitality. Your Christian character has so influenced the members of your family, that, as a reward of your fidelity to Christ, you have the joy and satisfaction of knowing that they are all connected with the Christian Church. We cherish the hope that your life will be long spared, that you may have health and strength to serve your Master to the end, and that your sun may set in a clear sky.”

He has had many other honours conferred upon him by his brethren. He has represented his district in the District Meeting on more than one occasion, and has been twice elected delegate to Conference.

He is a man of remarkable humour, which comes bubbling up at the strangest times and in the strangest places. Many an audience has been convulsed with laughter at his witty sallies and quaint stories.

He glories in Primitive Methodism, and loves its history, and glows radiant as he converses of some of the worthies whom he has known. And above all, is full of eloquent thanksgiving as he tells of all his five children – three sons and two daughters – being members of our own Church.

As a friend he is real. His friendship is elevating, beneficent. Tales of suffering have his ardent attention, and win his sympathy. His home is emphatically an “open house ” for all the servants of God. Pioneers and leading lights of the Connexion, local preachers, and especially “the lads just put on  the plan,” have ever received his welcome so inland cheery words and liberal hospitality. Indeed, it seems impossible for too many to call, or to call too often, or to stay too long.

Mrs. Austin, whose portrait we also give, was born in the same year as her husband, viz., March, 1829. He usually says, when speaking of their ages, “She has seen more Good Fridays than I have, but I have seen as many Christmases as she.” Like her husband, she was subject to the strivings of the Spirit while very young, and made a vow that if she was spared until she was twenty years of age she would give her heart to the Lord. This promise she kept, but regretted that she had not made choice of “the better part” much earlier. She has been connected with the church for more than 52 years, and has filled nearly every office which could be offered to her. For nearly forty years she has preached the gospel, often being engaged with her husband to preach “Specials.” Her fidelity to her own Church has been very marked, and largely through her industry, and that of her husband, the cost of enlarging their chapel, which amounted to £200, was met. As a missionary collector she has been a distinct success, and one of those who not only beg but give, and give handsomely.

Temperance reformers have in Mrs. Austin as most staunch supporter. Verily on temperance questions, as on evangelical, she expresses her views with no uncertain sound. Through her influence her husband and all the family are teetotallers. A few thousands of such women as Mrs. Austin would change the face of society in a short period. The space allotted for this article is too scant to do justice to a couple of such worthies as we are here dealing with, but if we cannot fully write of them on paper, we rejoice to know that they have written their principles on the tablet of many a heart.

We do not like to think how great will be the loss when such stalwarts fall in the great battle. What gaps in the ranks! But we trust our young men and maidens will hear the call of the great Leader, and join the “King’s Own” and stand in the fore-front of the battle, and never cease to wage war against the common enemies of our land.

May the one grand, God-enkindled, and all-consuming passion which has filled the hearts of our two friends for over fifty years, and which has made each in a great degree a bright and shining light, possess us younger folk, and may we radiate that borrowed light and heat until hundreds are filled with the same passion and fired with the same spirit of cultured evangelism.

Thomas was baptised on 16 August 1829 at Wybunbury, Cheshire. His parents were Thomas, a blacksmith, and Ann.

Thomas started work as a blacksmith, but by 1871 he was also farming 27 acres with the help of two men. He later ceased as a blacksmith and became a farmer/grocer.

Thomas married Catherine Bromfield, nee Johnson (1838-1878) in the summer of 1876 in the Nantwich Registration District. Census returns identify one child.