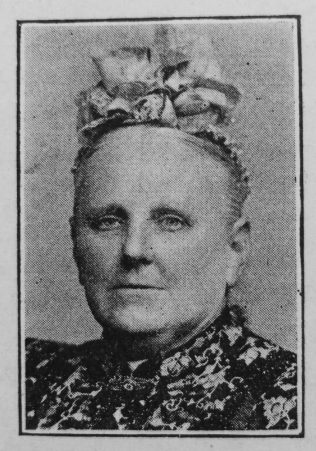 Transcription of Obituary in the Primitive Methodist Magazine by Philip Nume

The death of Mrs. Adams has removed a great soul, and a conspicuous worker from the ranks of Sheffield Primitive Methodists, and has inflicted a great loss on our church generally.

Rebecca Adams was born at Brampton near Chesterfield on August 20th, 1837. Her mother was a member of our church, and she herself was a scholar in our Sunday School at that place. She was converted to God in the days of her youth.

In March, 1857 she entered into holy wedlock with him from whom she parted recently for a little while. She was always an affectionate and devoted wife. “She looked well to the ways of her household, and did not eat the bread of idleness. The heart of her husband did safely trust in her. She did him good and not evil all the days of her life. He praiseth her.”

She was a noble mother. She gave herself unreservedly to her children. Their true welfare was her constant concern, and the subject of her daily prayers. Her departure has made a gap In their life which no other human can fill. She has left them a fine example of diligence, faithfulness, and well-doing. We are glad to know that some of her children occupy positions of usefulness and responsibility in our church.

On July 5th, 1861, her husband was converted to God. We had no chapel at Wombwell Main where Mr. Adams resided. On the night of his conversion he and his wife offered their house to our ministers to be used for public religious services. A Society class was commenced in their house and they became members of it. From that date until the day of her decease Mrs. Adams remained in fellowship with our church.

Forty-one years ago she and her husband came to reside at Sheffield, and they united themselves at once with us at Bethel Chapel, Cambridge Street, the Mother Church of Primitive Methodism in the city.

They have been members of our John Street Church from its beginning, indeed, they were two of its principal founders, and they have continued to be in the forefront of all its work and development.

Mrs. Adams’ loyalty and generosity to our church was a conspicuous feature of her character and life. From the first her home had an open door, and a hospitable table for the ministers and local preachers of our community. From the birth of John Street Church she nursed it, worked for it, and prayed for its weal. The members of John Street Church have decided to place a tablet in their chapel as a memorial of her character and work.

As the wife of a man whose zeal for our church consumes him, she worthily seconded his efforts – presiding with marked ability at the Ladies’ Missionary Meeting at the Conference of 1901.

Her generosity and Christian effort were by no-means confined to Primitive Methodism. It can be truly said of both herself and her husband that in hundreds of instances, “They delivered the poor that cried, and him that had none to help him. The blessing of him that was ready to perish came upon them, and they caused the widow’s heart to sing for joy. They were eyes to the blind, and feet to the lame, and a father to the poor, and the cause which they knew not they searched out.” The religious life of Sister Adams was not spasmodic and fitful. The fire of faith and love was ever burning upon the altar of her heart. From the day of her conversion to that of her translation she walked with God

She began life in lowly circumstances, but as the years passed Providence brought her much of this world’s goods. However, she was as humble and as sisterly in the day of prosperity as she was in the day of comparative poverty. There was not a particle of snobbery in her character.

She was not what is called a “Society Woman.” Society opened its doors to her and bade her welcome to its festivities and frivolities, but she preferred the quietness and peace of her own home, and the joys of church work.

Mrs. Adams’ life was not without its struggles and sorrows. She was familiar with family cares and trials. She suffered a great deal of physical weakness and pain. But in all these things she believed in God, and waited patiently for him. During the last years of her life especially, her bodily affliction was deep-seated and wearisome, but she carried her burden without giving it tongue, and hence many of her friends never supposed how soon it was destined to exhaust its strength.

Her end came on Friday, the 15th inst. Down by the sea where she and her loved ones together had often listened to the breakers, and watched the passing craft, in the noontide of an ideal summer day, God’s angel came to her. And in the presence of her husband and her eldest son, she joined the Divine Messenger, and sailed away over the “sunlit sea” to the “Better Land.”

We who are left behind
“Look onward, and with faces golden,
Speak to each other softly of hope,”

Numerous letters expressing sympathy with the bereaved ones, and appreciation of the noble character and work of our departed sister have been received from friends and public bodies both inside and outside our church.

The Vice-President of the Conference, Mr. G. Green, writes: “Thirty years ago my daughters used to tell of the motherly kindness of your excellent wife whenever they visited your home.”

The Rev. R. Hind writes in behalf of the Directors of tile Primitive Methodist Insurance Company: “They desire also to place on record their high appreciation of the Christian character of Mrs. Adams, and of the splendid service she has rendered to Primitive Methodism both in Sheffield and elsewhere, and they feel that our Church as a whole has suffered greatly by this event of Divine Providence.”

The Rev. E. Carrington writes on behalf of the Sheffield Free Churches Council: “Our Heavenly Father has been bountiful towards you, and not least in the companion He gave you, and preserved to you through so many years.”

The Rev. W. Barker says: “For over a quarter of a century I have cherished a high regard for her.”

Mr. Durham says: “The remembrance of a life such as we know Mrs. Adams lived, and the very bright experience which was hers, is to us a great inspiration, and undoubtedly many will rise up to call her blessed. In your great grief you will have the happy consolation that the life has not been one of self, but, living to shed a radiance all along the way, her influence will go on blessing others, and thus she being dead yet speaketh.”

Mrs. Adams’ funeral service was held at John Street Chapel on the 19th inst, and was attended by representatives of the Primitive Methodist Insurance Company, of all the Free Churches in the city, and of many distant churches, and a host of friends and admirers.

The President of the Conference gave a most appropriate address.

A memorial service was held in the same sanctuary last Sunday night, and was conducted by the Revs. J. Shaw, P. Nume and W. Cutts.

Rebecca was born to parents William, an earthenware dealer, and Esther.

She worked as a candlewick winder in 1851.