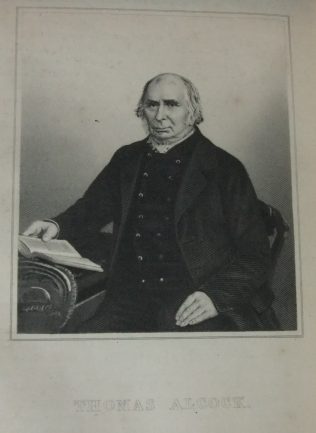 Thomas was born in February 1789 at Ipstones, Staffordshire.

Conversion and starting to preach

Thomas was converted through the Wesleyans in 1807. He had been drawn to the Wesleyans following the conversion of his brother William. Thomas joined with the Primitives following hearing James Bourne preach at Gratton in 1810. Shortly afterward he began public speaking himself with such great effect that the early leaders of the Primitive Movement were anxious to secure his services as a preacher. In the early days he often travelled journeys of between twenty and thirty miles and preached 3 or 4 times.

For a number of years it was his custom to work as a bricklayer in the summer to earn sufficient money to go out on a mission. He returned home when the money ran out.

When his portrait was published in the December 1867 edition of the Primitive Methodist Magazine, Thomas was claimed to be the oldest living PM member and local preacher. His name appeared on the first handwritten plan of the Tunstall Circuit in 1810. He is number 12 on the first printed plan.

Kendall writes that Thomas was associated with the Society at Talke, and was ‘a man of faith and spiritual power, the memory of whose piety and usefulness is still fresh and invigorating.’

Thomas’ brother William also appeared on the first plan. In 1818, William Alcock was No. 6 on the Tunstall circuit plan. Kendall reports that he then retired from the ranks and, it is said, located in Derbyshire, and lived to write a few words on the friend of his youth and prime, which found a place in Walford’s ” Life of Bourne.”

The obituary in the PM Magazine describes him as the Venerable Thomas Alcock. The author writes; ‘A singular amount of uprightness and honesty pervaded the character of the deceased; his gifts for charitable and benevolent purposes were large and frequent, and were generally given privately, without show or ostentation. His preaching was plain and practical, and calculated to do much good.’

Thomas married Mary Edwards (1793-1885) on 29 February 1820 at St James, Audley, Staffordshire. After his marriage he moved from Ladderedge, nr Leek, to Talk-o’-th’-Hill. Records  identify ten children. Only four of his children survived him.

Thomas died on 6 Mar 1870 at Talk-o’-th’-Hill (Talke), nr Audley, Staffordshire.  A letter of condolence was written by William E Saunders, from the Tunstall Circuit, to his wife Mary.