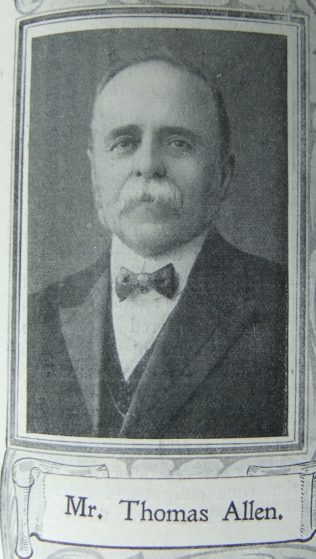 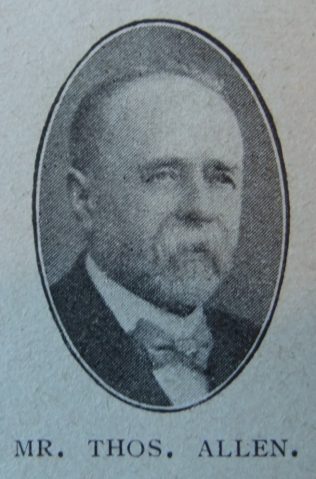 Mr. Thomas Allen, Circuit Steward of Bradford Fourth Circuit, was born in 1850, in the city. For six years he has discharged the duties of that office with a most liberal, loyal and kindly spirit. He hot converted when sixteen, in Bingley Chapel, and has continued a member for forty-two years. Some of his early years were spent at Bingley and Shipley, where he found his wife, who has proved a most valuable helpmate. He loved the Sunday School from childhood, and for the last twenty-five years has been a most successful superintendent at Manningham. As assistant Class leader, Trustee, or anything in the church he is always reliable. The District holds him in high esteem because of his consistent Christian character. Many honours have been conferred upon him, but none is more highly appreciated by him and his good wife than his appointment as Delegate to the Leicester Conference. May their years of joyous service be many.

Thomas was born in 1850 at Manningham, Bradford, Yorkshire, to parents William and Elizabeth. William was a power loom weaver of worsted in 1851. Later, in 1881, he is described as a licensed hawker and local preacher.

His obituary records that he was in membership for over fifty years and was superintendent of the Sunday School at Manningham for twenty-eight years.