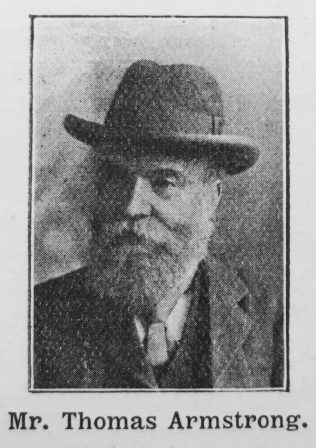 Mr. Thomas Armstrong, of Whitelehead, in the Burnopfield Circuit, passed to his reward on the same day that Queen Victoria died. He was born at Allenheads, sixty years ago. Little is known of his early life, but he began to serve God at an early age. At his father’s death the family removed eastwards, and settled at Armfield Plain, where Mr. Armstrong became united in wedlock to Miss Smith, who now survives him with two sons and four daughters. Soon after marriage our brother’s health somewhat failed, but he diligently improved his mind, and by private persevering study gained a certificate qualifying him to teach, and he opened a private day school with some success.

Shortly afterwards he was appointed to fill a vacancy in the Primitive Methodist day school at High Spen, where the next twenty years of a busy life were spent.

Besides his daily duties in the school, he ably filled a variety of offices. He was the local Liberal agent, conductor of the Chapel Choir, a chief promoter of the Mechanics’ Institute and of the Temperance Society. He was ever ready to help in any work that would improve the social, mental and moral condition of the people.

Mr. Armstrong was also a very acceptable local preacher for upwards of forty years, and was never known to miss an appointment without a real and valid reason. He was a friend of local preachers, he corrected their errors, advised them in their choice of books, and trained them in habits of study and methods of preparation and preaching. In a beautiful address at the funeral of our departed brother, Mr. J.W. Taylor, C.C., of Dipton, gave tender witness to the valuable help he had received from his dear dead friend. Mr. Taylor also testified to the sterling manhood and integrity which characterised the deceased.

On leaving Spen five or six years ago, he was appointed Clerk to the Tanfield Urban Council, which office he very creditably sustained till he died. He was subject to attacks of bronchitis, the last attack ending fatally within a week. We visited him in his last illness and found him calm, patient and trustful, and manifesting great thought and love for his sorrowing family.

Whilst living at High Spen (1881 census) as well as being an elementary school teacher, Thomas worked as sub-postmaster. His wife Elizabeth assisted him in the post office work.