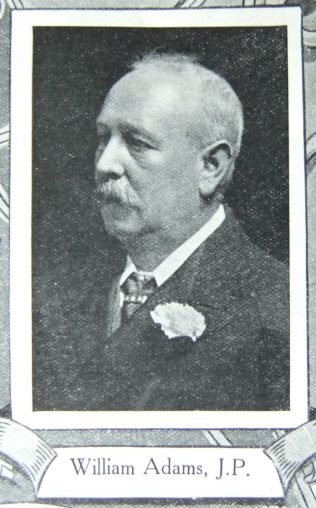 William Adams, eldest son of the late Henry Adams, was born at Wombwell. He came to Birmingham 25 years ago and joined Thomas Street society. An ardent lover of music he was appointed organist and then choirmaster. In 1890 he became joint Circuit Steward, and when Thomas Street was made the head of a new Circuit became Steward, which office he has held ever since. The Sparkhill Church succeeded Thomas Street, and one little society has become a Circuit with two ministers.  Mr. Adams was a County Councillor for nine years; appointed a magistrate for Warwickshire ten years ago, and recently on the Worcestershire Bench. Mr. Adams believes in the genius and destiny of Primitive Methodism, and is doing much in its behalf. He has been a delegate to Conference several times, including the Centenary Conference at Tunstall. He is a lover of our Zion, and a giver on a magnificent scale.

William followed his father into the insurance business.