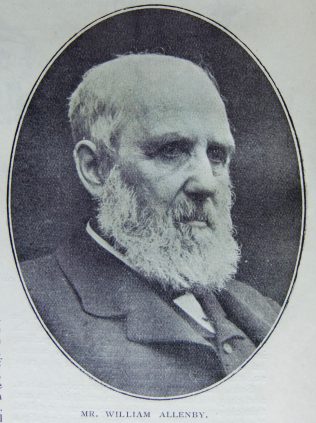 Transcription of Sketch in the Christian Messenger by Arthur Wilkes

WILLIAM ALLENBY, whose portrait adorns this page, is as worthy as any man we know to occupy a place among the good men and true whom the MESSENGER delights to honour month by month in its “Local Preachers’ Gallery.” He has lived his long and useful life in the quaint and snug little Yorkshire market town of Helmsley, where he was born over 71 years ago. While his years were yet tender, he gave himself to the Lord in a service conducted by his father, in whose character and influence young William was blessed indeed. In his mother too – who died while he was in his teens – he was equally blessed and by her he was early taken to the Methodist class meeting. The father was a class leader, trustee, and local preacher with the Wesleyans till about the year 1850, when he and all the members of his class – young William included – were dismembered, owing to their sympathy with the Reform Movement, which was then agitating the old body. About this time our Society at Helmsley was made the head of a “Branch” of the Pickering Circuit, and, during the superintendency of the late Rev. Geo. Stout, the Allenbys threw in their lot with our people.

They assisted in the establishment of the first Sunday school in the town, which gathered 180 scholars on the day it was opened, and which, after being unsectarian for a number of years, became, what it is to-day – a Primitive Methodist school. Early in the “fifties” young Allenby’s gifts of utterance were recognized, and his name appeared on the local preachers’ plan along with that of the Rev. Joseph Sheale, his life-long friend, who was destined soon to be called into the wider sphere of the ministry of our church, in which he has spent 45 busy and happy years. For 50 years the two have been as David and Jonathan. Mr. Sheale says: “What William’s friendship has been to me through the years cannot be estimated. I hope the Lord will long spare him. It would be difficult for one to fully represent the deep interest and sincere devotion that Mr. Allenby has ever taken in God’s work on his station, and I am sure no self-sacrifice was too great for him to make. He never murmured that he had too many or too few appointments. It did not matter whether the journeys were long or short, whether it was wet or dry, hot or cold. William’s aim was – and is – to please God, get sinners converted, and strengthen the church.”

He has always manifested an intense and practical interest in the welfare of our cause at Helmsley, and has put forth strenuous and self-sacrificing efforts for its advancement, as also in the interests of Nonconformity and the cause of progress in general. The “atmosphere” of the locality is not the most favourable to Free Churchism and progress. Landlordism – of the most “Conservative” type – and Ritualism are rampant, but William Allenby has neither cringed to the one nor faltered in his protest against the other, but has been a staunch adherent to, and advocate of, Liberalism, Nonconformist principles in general, and Primitive Methodism in particular.

As a result he has won at least the respect of “the powers that be,” and in addition has had the joy of witnessing a very encouraging development of our cause in the locality. When the Helmsley Branch was formed its revenue reached the remarkable sum of £6 per quarter, but for many years it has been entirely self-supporting. He is on all the chapel trusts in the station, and has seen five of its chapels built and paid for, largely through his own wise guidance and cheerful generosity. And he is not without hope, despite his advancing years, of living to see a sixth. Well do we remember with what pleasure he effected the purchase – entirely on his own initiative and responsibility – of property suitable for a building site for a chapel in a village from which the squire had long succeeded in shutting out all “Dissent.” Nor is he so engrossed with claims and duties that are merely local, as to forget or ignore the larger. He takes the greatest possible interest in all that concerns the welfare of our church as a whole, as well as in the wider march of the Kingdom of God in the world.

It is small wonder that the church delights to honour such a man, though such honour is unsought and sits lightly upon him. What he prizes far more highly than the honour is the love and esteem of his brethren of which it is the expression. He has been station steward for more than a quarter of a century. On several occasions has he represented his station in its district meeting, the last being the one recently held at Knaresborough, where he was by a unanimous vote elected Vice-President; and twice at least he has been elected to Conference. If to say little and vote wisely be any qualification for election to a seat in our highest court, then Mr. Allenby enjoys that qualification to a rare degree. And he has also those higher qualities which compel the admiration and esteem of all – unstinted service to his church and a truly Christly spirit.

To say he has his faults is but to admit that he is like the rest of us – human. But even his failings “lean to virtue’s side.” We have known him placed in trying circumstances, when injury might, excusably, have roused resentment, but he has chosen the better part, and suffered in silence.

The shadows have been in his home and some of his rarest treasures are in heaven. But life has its compensations, and the Lord has been very good to him, as he gladly testifies. Gratifying success has been vouchsafed to him in his manifold business undertakings as printer, grocer, chemist, &c. His wife is a gift from the Lord – a helpmeet indeed, who cheerfully encourages and co-operates in his many ministries and gifts. What generous and homely hospitality their ever open home affords to the Lord’s servants may fitly be put on record by one who has many times enjoyed it. His daughters are active workers in the church and Sunday school.

His son, John E. Allenby, who was educated at Elmfield College, has passed the London University examination, and, having qualified as an M.P.S., is practising as a chemist at Helmsley, where he is rendering excellent service as a cultured and acceptable local preacher and an earnest worker in our church.

We have no space to speak of Mr. Allenby as a class leader, temperance worker, and Sunday school superintendent, as to all which much might be written. He has well earned his recent retirement from the cares of business, and will now all the more fully give himself and the years that remain to “the work of the Lord.” A genuine admiration for his kindness of heart and loyal service to our church has inspired this modest tribute.
“Kind hearts are more than coronets,
And simple faith than Norman blood!’
May the eventide of our friend’s life be long and light.

William was baptised on 6 April 1832 at Helmsley, Yorkshire. His parents were James, a grocer and draper, and Elizabeth.