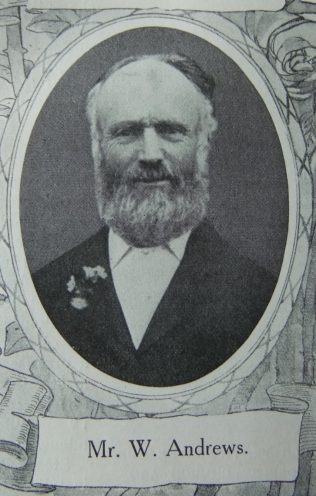 Mr. W. Andrews, the Senior Steward of the Sturminster Newton Circuit, was born sixty-three years ago, and has been a local preacher for about forty years, and a Sunday School teacher for thirty years. He is held in the very highest esteem by the church at Mainhull, where he resides, and by all the friends in the Sturminster Newton Circuit. He is a very genial brother and is an ideal Circuit Steward. When he retired from Sunday School teaching, a short time ago, he was the happy recipient of an illuminated address presented by the Sunday School. As a preacher he is very acceptable and has rendered splendid service in the pulpits of the Circuit as well as by his wise statesmanship as steward of its financial interests. May he long be spared to engage in the work he loves so well, and continue to serve the church, to which he is so sincerely devoted to a green old age.

William was born in 1846 at Marnhull, Dorset, to parents John and Elizabeth. John worked the land.

William worked as a carpenter.