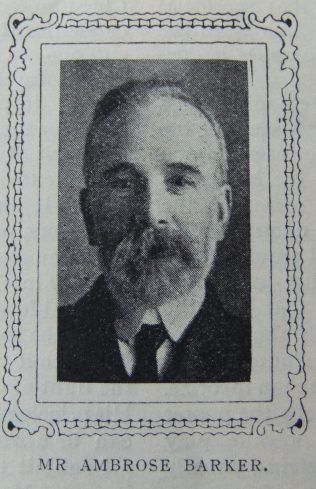 MR. AMBROSE BARKER is one of the host of loyal workers, who by their spirituality and devotion, have made Upper Moss Lane Society, in Manchester Second Circuit, famous as one of the finest churches, schools, and centres of work in our beloved Connexion. By the hearty and unanimous vote of his brethren he is, and has been for years, Senior Society steward. He was born in Hull in 1844 of godly parents, who came to reside in Manchester while he was young. In 1861 he became a scholar in Moss Lane School and for these fifty years he has maintained a worthy and unbroken connection with the church.

He has always been a willing worker and ever ready if called upon by his fellow-labourers to share the burdens and responsibilities of official life. Hence during these years he has acted, to the great satisfaction of his brethren, as trustee, superintendent and secretary of the Sunday school, Band of Hope secretary, and treasurer of the Pleasant Thursday Evening. He is a brother beloved, methodical, painstaking, reliable in all the work he takes in hand. He is deeply spiritual, in whole-hearted sympathy with all that fosters the true prosperity of the church. In regularity and punctuality of attendance at the Sabbath services he gives a worthy and inspiring example. He is not too tired to remain for the Sabbath evening prayer meeting, and busy man as he is his place is rarely vacant either at his class or the Thursday service.

Generous and sympathetic to all needy causes, he is also modest and retiring, eager to do his work without flourish of trumpets, and only consenting after some pressure for this modest recognition to appear. There is still upon him the dew of youth. May he be long spared to serve our church.

Ambrose was born in 1844 at Hull, Yorkshire, to parents Ambrose and Sarah. Ambrose, senior, was a joiner.