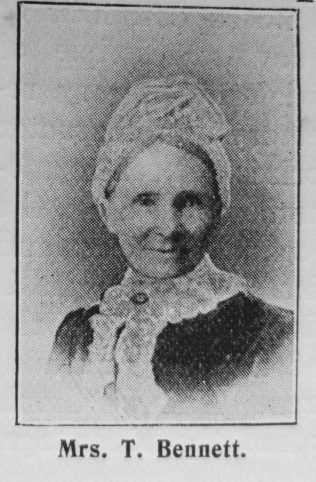 Transcription of Obituary In the Primitive Methodist Magazine by H.J. Taylor

The Derby Road Church, Southport, with many others in various parts of the Connexion, mourns the loss of Mrs. T. Bennett. She changed mortality for life on May, 1900 , aged seventy-seven, after but a few hours’ illness.

Mrs. Bennett belonged to the second generation of Primitive Methodists. The first generation of men and women, who had founded our Church, were fast closing their activities when the late James Jackson and Robert Eglan missioned Newport, in Essex, Mrs. Bennett’s native village. Primitive Methodism had already justified its existence, and had spread into almost every county in England, and gathered thousands of members. Mrs. Bennett, a girl of fifteen, heard the missionaries, accepted their message, yielded herself up to God, and immediately joined the little Primitive Methodist Church. This was the year after the Queen ascended the throne. She at once became an active member, and for sixty-two years she remained in active service. But those of us, who have only witnessed the last decade of her life, have no adequate conception of her activity. The generation of Primitive Methodists to which she belonged lacked some things of these later days, but they had characteristics which we may wisely covet. They were thorough, they had an experimental knowledge of salvation, they lived a life of prayer, they did something to get other people saved. Religious work to them meant more than singing and praying, and begging, and arranging meetings and teas; religious work meant getting people to give themselves up to Jesus Christ, body, soul and spirit, and if ever a woman in our Church did this, Mrs. Bennett was that woman. Her spheres were all the spheres which our Church provides for soul-winning: the Sunday school class, the open-air mission, the prayer meeting, and the pulpit. She entered all these, and used her own gifts with advantage to the Church in them all. For over thirty years she travelled various Circuits with our dear bereaved friend, the Rev. Thos. Bennett. He gratefully admitted, while she lived, that he attributed much of his success to her. She co-operated joyfully in all his labours, and bore with him his responsibilities. If she was not a daughter of the college, she was a devoted disciple of Jesus Christ; if she has left no literary remains, she has left the memory of a character without a stain; if her work is not commemorated in marble, it is commemorated in the redeemed lives she, in the school and class and village pulpit, led to Christ. If her praise is not published abroad, it is better still in the home, in the heart of her sorrowing husband, daughter and grand-children. And we thank God that our Church has had the advantage, in the closing years of her life, of her interest, sympathy and constant prayers.

The Rev. H. J. Taylor, pastor, assisted by the Revs. T. Wilshaw, J.E. Hughes and G.W. Meachim, officiated at the funeral, and many friends attended

Ann was born on 13 February 1823 at Saffron Waldon, Essex, to parents John, a farmer, and Ruth. The 1851 census identifies that Ann worked as a bonnet maker before her marriage.