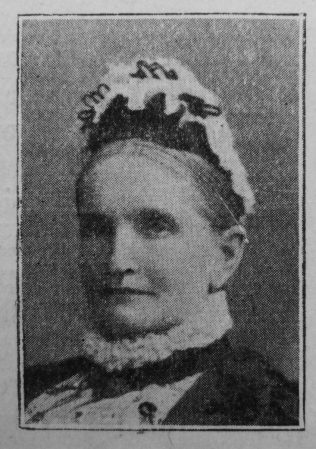 Transcription of Obituary in the Primitive Methodist Magazine by John Hodges

When God kissed Mrs. Spencer Brown, of White House, Belgrave, into sleep, our Claremont St. Church, Leicester Fourth Circuit, lost one of its oldest and most loyal members.

She was carried to the Church and Sunday School before she could walk, and for the long period of nearly sixty-seven years her life has been closely identified with this place of worship. Her father was for nearly forty years Sunday School teacher and superintendent in the days when Belgrave was little more than a village, and our cause a very weak and struggling one. Hers was a goodly heritage, and to her everlasting credit be it said, she kept that heritage untarnished. In her quiet, humble, unostentatious way she has contributed much to the making of what our Church at Claremont Street is to-day. In her earlier years she was an active worker; all her life she was a generous supporter, and when health permitted, a regular attender at the means of grace. She loved the place where God’s honour dwelleth – the very bricks and stones were sacred to her. During the last year she had been in very indifferent health, but her interest in Zion’s welfare never abated. When unable to attend she fervently prayed for God’s blessing upon the services. Her home was always open to the minister; she was the minister’s friend, gave him a kindly welcome, and ever had an encouraging word for him.

Our hearts go out in deepest sympathy for him who for forty-five years has been her devoted husband. Their married life was an ideal one. It was forty-five years of peace and love. It being a union of souls as well as a joining of hands, their interest in our Church was a united one, and for many years the bereaved husband has been its Society Steward, and one of its strong pillars beloved for his peaceful disposition and Christly devotion by all who knew him. May God be the companion and strength of his lonely days. As a mother she brought up her children in the love and fear of God, and for years she had the joy of seeing them walking in the path of purity and peace. Two sons Mr. A. Brown, Birmingham, and Mr. S. Brown, Northfields, Leicester (secretary of our Claremont Street Church, local preacher and Circuit Steward of Leicester Fourth Circuit, and one daughter, Mrs Nutt, Leicester, mourn her loss.

For the past two months she had been confined to her bedroom, but even in extreme pain was patient and cheerful. A fortnight before she died she knew there was no hope of recovery, but she was resigned and ready to go up higher when the call came. Her last hours were hours of blissful consciousness, her end was peace. She had lived for Christ, and she knew that to die was gain. On December 20th, she joined the Church Triumphant.

The burial took place on Friday, December 23rd. The funeral service was held in our Claremont Street Church, conducted by the Revs. John Wenn, J.W. Ullyatt, and J. Hodges, who gave the address. The Rev. J. Wenn read the committal at the graveside, and in the still, frost-bound cemetery, as we looked at little Spencer, clasping his bereaved grandfathers hand, we thought of the four generations associated with our Church, of the living past and hopeful future, and also of the resurrection morn when the winter will be over and gone, and the everlasting summer appear.

Ann was baptised on 11 February 1838 at St. Peter’s, Belgrave, Leicestershire. Her parents were Henry, a frame-work knitter, and Ann.

She married John Spencer Brown (1837-1913) on 17 July 1860 at Belgrave. Leicestershire. Spencer was a frame-work knitter, but by the time of the 1891 census he had become a market gardener/farmer. Census returns identify three children.