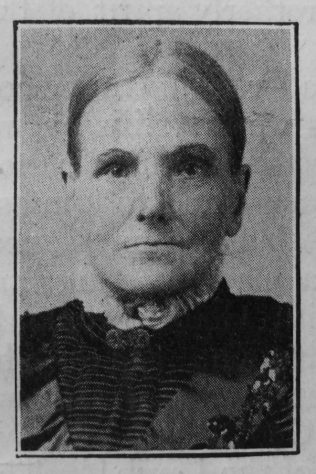 Transcription of Obituary in the Primitive Methodist Magazine by W. Duffield

The passing of Grace Bailey has left our Marsden Church, South Shields, with a vacant place it will be hard to fill. Her summons came at the ripe age of seventy, after thirty-three years’ membership in our church. Born at Halwill, Devon, she was converted at an early age, and joined the Bible Christian Church; but on coming north in 1874 she joined in fellowship with us, finding great joy in communion and rich blessing in worship with us.

Her sweet disposition and buoyant faith, her cheerful spirit and Christian service endeared her to all who knew her. During the last two years she has been confined to her house through severe affliction, yet her faith never wavered. Her strong confidence in God, her unostentatious gifts to the church, and her quiet Christian influence were a rebuke to many more favoured ones. Her influence in the home, also, has resulted in nearly all her family joining the church.

One bright spot in her life was the monthly advent of the ALDERSGATE, which she has read for many years, and which kept her in touch with the many connexional interests.

She passed away peacefully on Monday, June 27th, and was interred the following Thursday. An impressive service was held in our church, conducted by the writer of these lines, assisted by Rev. Mr. Gadd, curate-in-charge of the parish, who had often visited her during her affliction.

Her memory is very fragrant. Her life was as a box of precious ointment broken as an offering to her Lord. Her holy influence will linger with us as a precious heritage.

Grace was born in 1837 at Halwill, Devon, to parents Thomas, a farmer, and Sarah.

Before her marriage, Grace worked as a dairy maid.

She married John Bailey (abt1838-1918) in the summer of 1863 in the Okehampton, Devon. John was a labourer at the time of their marriage, but became a coal miner when they moved to the North-east. By 1901 he had become a mine deputy. Census returns identify five children.