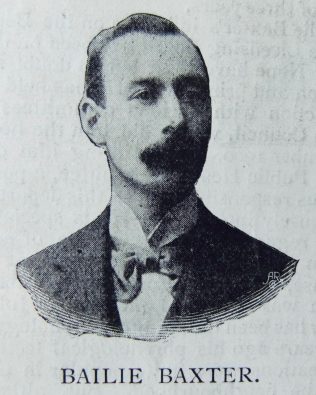 Transcription of Sketch in the Christian Messenger by ‘Loch Ranza’

BAILIE THOMAS BAXTER, of Greenock, is a native of Polmont, in Stirlingshire, where he was is born forty years ago. His father was a Wesleyan local preacher, and his home influences were towards God. When 14 years of age he came to a consciousness of sins forgiven and at once began to attend the class meeting. Shortly after he became a teacher in the Sunday school. At the age of 16 he entered the shop of a relative in Glasgow who had a grocery business. After a year’s experience there he left the shop and in order to more thoroughly equip himself for the future, spent two sessions in study at the Glasgow University. During a vacation, being on a visit to Greenock, and finding a very suitable grocery business in the market, he bought it, intending it to afford him the means for pursuing his studies later. The way did not so open, however, and gradually he settled down to business life, in which he has by dint of hard work and careful attention, considerably prospered,

Mr. Baxter has given much time and thought to work of a public nature. He first entered the pulpit in his home circuit when 17 years of age. On coming to Greenock he naturally associated himself with the Wesleyan Church. His connection with Primitive Methodism dates from 1884 when the Rev. George Lewins travelled in Greenock. Mr. Baxter’s name soon appeared on our plan and he began to regularly preach. The opportunities for local preachers are obviously not numerous in connection with a pastorate, but on the other hand, acceptable local preachers are not numerous either, especially in connection with a small church, and that a Scottish Church. For Scotland has a high ideal of preaching and is not easily satisfied with either layman or minister in this respect. It is but the truth to say, however, that the subject of this sketch has not lowered the ideal.

In our own pulpit once or twice a quarter, and frequently in the pulpits of other churches (including the established Church of Scotland) he is ever acceptable, and, we believe, increasingly acceptable. For he is a man who has grown. Thought and observation and continual reading have developed his intellectual powers and enabled him to bring forth out of his treasure things new and old. His library is choice and well selected, and though leisure is not so easy to command as in other days, he has no keener delight than to sit down to a ‘brainy’ book. He has read much, and gained much, from Emerson and Carlyle and Ruskin. But, as a preacher, the inner sympathies of his being have been most met in the sermons and writings of Henry Ward Beecher. Mr. Baxter has read almost every thing that Beecher has written. He speaks in terms of high commendation of the Expositors’ Bible, particularly the volumes by Dods on John’s Gospel, and that by Findlay on the Ephesians. In preparing his sermons, our friends writes fully. He works best under pressure and some of his most helpful discourses have been delivered at short notice.

In earlier years his preaching was more abstractly doctrinal in its matter and philosophical in its manner of presentation. He has seen, however, the necessity and the power of a simpler, more practical, more evangelical style. The doctrines of grace are his familiar subjects now, with a strong background of personal experience, and they are proclaimed with a gift of graceful utterance which constrains attention. Mr. Baxter uses notes in the pulpit, but does not read. His ideal is to be free of notes altogether, but (like most of us) his ideal is yet before him. He confesses to a fear and trembling which even yet is felt as he faces a congregation – a state of mind by no means to be lamented over. We want more sense of human weakness and more fervent, believing, clinging to the Divine arm to uphold.

Our brother is not unknown on the platform. Some remember with kindling emotions the chaste and soul-stirring address on  ‘Spiritual Power’ which he delivered at the Wishaw District Meeting of 1897, while more will remember his charge to the church at the ordination service in connection with the 1898 District Meeting, held at Parkhead.

In many ways Mr. Baxter has served our church. For twelve years or more he has been school superintendent, and an ideal superintendent he is. Long continuance in one office sometimes does a man harm and works out to the disadvantage of the organisation, but it has not been so in this case. Our brother is marked out in many ways as the man suited to such a post. He is never avoidably absent from the school, and his control of it is admirable. His addresses from the desk are well prepared, and richly enjoyed by many, while his relations with the teachers are most happy. He has been a class-leader for many years. For ten years he conducted an interesting young people’s class, which was ultimately converted into a Y.P.S.C.E. The latter organisation finds him ever ready to serve it when opportunity offers.

Bailie Baxter has been frequently honoured by his church. Nine times he has been delegate to District Meeting, he has represented the District at a Triennial School Conference, and has twice sat in Conference. He has been appointed the first vice-president of the newly formed N.B. District Preachers’ Association. He is an active Temperance worker. A trustee of the Temperance Institute, and one of the executive of the Greenock Total Abstinence Society, he is well-known as an advocate of the cause. His work at the Police Court has served to deepen his conviction as to the terrible nature of the drink evil.

His work on public bodies commenced in 1895, when he became a member of the first Parish Council on its formation under the new Act. A few months later he resigned on being elected to the Town Council. Since then he has been returned unopposed twice and has once (in 1899) had to fight for his seat, which however he retained by a good majority. Immediately following that re-election he was appointed to a vacant bailieship, which is an office analogous in most respects to the borough magistracy of England, with the difference that bailies are appointed by the Town Council from among its members, and for a term of three years.

Bailie Baxter’s influence on the Bench and a on the Licensing Board has been on the right side. None have been left in doubt as to his position and principles. He has held office connection with various committees of the Town Council, which did him the honour, November 1900, of appointing him convener of the Public Health Committee, a position of obvious responsibility. In this department he is intensely interested. He is specially exercised regarding the prevalence of consumption in the country, and attended, at his own expense, the Royal Congress on Tuberculosis which was held in London last July. His hobby has been the study of phrenology. Some few years ago his phrenological lectures and delineations were quite popular in Greenock and the neighbourhood. But, although he still regards phrenology as a valuable aid to the study of character, pressure of other work does not allow him to devote time to it as formerly.

What opportunities for service the future may hold for our friend none can say, but all will join in the hope that he may be long spared to serve his generation by the will off God, in the strength of God, and for the glory of God.

Thomas was born on 28 June 1861 at Polmont, Stirlingshire, to parents Thomas Baxter and Janet Sneddon. Thomas, senior, was a coal miner.