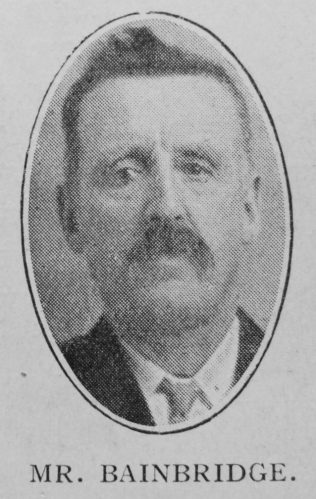 George Bainbridge was born October 28th, 1855, and entered into rest August 16th, 1912. He was converted in the year 1881, a year memorable in the North of England as a year of great ingathering of souls through the labours of Miss Wilson and Miss Watson, of Cumberland. Bro. Bainbridge at once gave himself to the Master’s work.

We have records of his fervent service in the early years of his Christian experience. In the year 1887 he was accepted as a local preacher in the Brampton Circuit. The family removed to the Lemington station over twenty years ago. It was in the latter place where the chief work of Brother Bainbridge was seen. He was for many years a devoted Sunday School worker, a class leader and local preacher. His ministry was acceptable and effective.

About nine years ago, in going to an appointment, he received a shock to his system, at a level railway crossing, from which he never recovered. Ever after he suffered from heart trouble, which curtailed his preaching appointments.

George Bainbridge was a true helper of others; he practised Christian beneficence without ostentation. He was the first to take the lead and assist in any case of misfortune that befel a fellow workman. His prayers and his alms are a memorial unto him. His home was a household of faith. He had the joy of seeing before his death his two sons and daughter enter the Church, and they with his widow remain active members of our Throckley society. A large and representative gathering attended his funeral. A memorial service was held in Throckley Chapel on Sunday, Sept. 1st, at which the writer made special reference to his life and service.

He married Margaret Bell (1862-1924) in the spring of 1883 in the Brampton Registration District, Cumberland. Census returns identify three of four children.